Welcome to TDG's newest weekly feature to cover the recruiting comings and goings in Gopher Nation.  We are not trying to usurp Rivals or Scout, they do their thing and do it well.  We want to give you more commentary, more info from a variety of sources and less texting of recruits to get their top 5.

This will be a Wednesday feature, I would recommend a Gopher Illustrated (Rivals) membership to see their Thursday evening "War Room" which usually has plenty of information on a lot guys on the Gopher radar.

The Week in Review

It was a fairly quiet week for football recruiting. With an away game there were no visits and no additions to the verbally committed list.  What did surface were the names of a couple four-star JUCO kids who have Minnesota near the top of their respective lists.  With the success of Tramaine Brock, Simoni Lawrence and Traye Simmons I'm all for bringing in another guy or two who can make an immediate impact to a position of need. 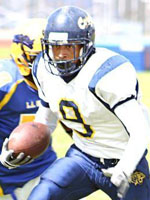 The first is a four star receiver who has listed the Gophers amongst his top 2.  Hayo Carpenter is in his second season at College of the Canyons in Califorinia (nice little alliteration there huh?) and is currently listing Minnesota and Florida as his top two.  The good news for Gopher fans is that Florida hasn't actually offered a scholarship to Carpenter.  You can see a YouTube video of him HERE.  With the lack of playmakers behind Decker, a guy like Carpenter would be exactly what we need for next year.  Someone who can make an immediate impact would lessent the preasure for the young guys to step up.

Carpenter is a four-star receiver who reportedly has 4.4 speed and is ranked the 11th best JUCO in the country accoring to Rivals.  He is on track to enrol at his new school in January and would have two years left to play.

Another JUCO has also moved on to the Gopher radar and is ranked the 30th best JUCO available.  Anthony Leon is a four-star defensive back from College of Sequois.  If that school sounds familiar it should because it is where we plucked Big Playe Traye and it is where we placed Clint Brewster.  Leon enrolled at Florida State out of high school and has taken the unusual path of playing with the Seminoles for two seaons before deciding to transfer out.  Because of this he would have just one year to play at his next school and he would also enroll at his new school in January.

I'm not as sold on Leon.  He may be an upgrade but he would also be battling with Kyle Theret and Kim Royston for playing time.  Carpenter would likely be an immediate starter, especially with the spring to get acclimated to the Spread Coast.

With Indiana at the Dome this week there will be a handful of recruits on hand for their "official" visits to campus.  Brewster had incredible success last year landing a high percentage of the kids who made it to campus.  And that was with the inability to get a second win.  Everyone is pretty confident that there will be a boat load of recruits at the Michigan game in early November.

The biggest name coming this weekend is Eric Stephens.  He is a four-star running back out of Texas.  Stephens has already verbally committed to the Gophers and the timing of his visit couldn't have been better.  Rumors are swirling that he is rethinking his original commitment and is listening to Texas A&M.  So getting him on campus and showing him a good time would be good to secure things in his mind.

(Ed NOTE: Rivals reported this morning that the Overland Park trio will not be visiting this weekend but feel free to read what I wrote anyway)  Also coming are a trio of three star recruits out of Oakland Park, FL.  First of all we have  Isaac and Jacob Geffard.  The three star twins have dual offers from Iowa State and Louisville.  They are both in that small linebacker / safety / hybrid mold so where they end up playing isn't clear at this point.

But let's hope for nice weather so the Florida kids go home with happy thoughts about Minnesota.  Lets also hope the 2008 version of the Skyline-4 will be the Overland Park Trio.  That doesn't exactly roll off the tongue but it would be another nice recruiting pipeline to secure.

Kendall Gregory-McGhee is a Colorado athlete is coming to visit this weekend.  Gregory-McGhee is used offensively as a receiver, tight end as well as starting as defensive end.  He is big and not particularly fast, at least not fast enough to play receiver.  I would guess that tight end is an option and I could also see him being molded into a pass rush specialist.  He also has offers from TCU, Colorado, Colorado State and Boise State.

How did our verbals do?

This is where I will usually give you amazing stats from the kids who will be wearing marroon and gold for the next four or five years.  But this week I'm going to give you the stats of zero carries and zero yards for this weekend's visitor.  Eric Stephens hasn't played for back to back games for his Mansfield-Timberview Wolves.  Hopefully when in town this weekend we can find out what is going on.  Prior to not making the box score in games three and four, Stephens had rushed for 164 yards and 2 touchdowns in games one and two.

I enjoy putting together a top 10 wish list.  If I could pick any 10 future Gophers who have not yet committed these would be the guys I want, IN ORDER.

Thus concludes the virgin installment of your weekly recruiting rundown.  Please let me know if there is more you desire to see.   I'm not planning to spend all week putting this together but I'd be happy to look into anything for my loyal subjects readers.