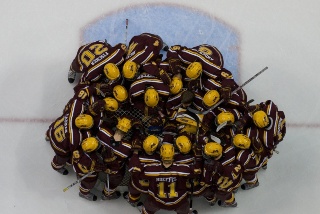 (Editor's Note:  What has two thumbs, is a basketball junkie and is trying to write a hockey preview?  That's right, this guy!  Bear with me and help me along as I'm sure this will be a learning process for me.)

There is no denying that Gopher Hockey fans are the most passionate fans in the Gopher market.  This passionate fanbase and sustained success has given Joel Maturi one of the few men's hockey programs in the country that is a plus to the athletic department's budget.

I'm jumping with both feet into the frozen pond.  Rather than going with a traditional positional preview I am going to give you a few key themes to this season which will also be keys to making a successful season.

The goalie who saved the season last year and is expected to carry the young team this year.  Most of you know that Kangas decided to "stand on his head" (one of my favorite cliches in all of sports!) during the WCHA playoffs where he allowed 1.5 goals per game and a .959 save percentage.  I'll point out many times that I know little about hockey but even I get how amazing those numbers are.  In his 25 other games played, including the first round NCAA loss to eventual national champ Boston Colloge, he gave up 2.24 gpg with a .921 save %.  Not quite the same awesomeness but great none the less.

My concern with Kangas is that he will not be able to live up to expectations as he heads into his sophomore season.  People are going to expect the WCHA Kangas and won't be happy with the regular season Kangas.  In spite of the fact that regular season Kangas is still very good and one of the top two or three goalies in the WCHA. 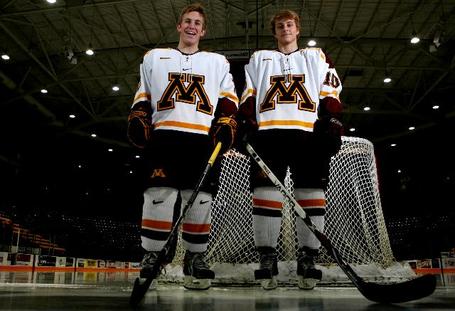 What seems to be a yearly theme is the loss of quality players who are being replaced by a group of very good youngsters.  This year coach Lucia brings in a class of 12 freshmen after losing a solid senior class, Blake Wheeler and Stu Bickel.  Inside College Hockey rates this incoming class as the second best group in the country.  F-Jordan Schroeder and D-Aaron Ness (both pictured on right, taken from Star Tribune) are the headliners of the class expected contribute greatly as soon as possible.

This may be the most intriguing development throughout the season.  How quickly can the freshmen mesh with upperclassmen to develop a deep and consistent team?  Unfortunately this isn't like basketball where you get a heavy dose of non-conference games to figure things out.  The Gopher's first regular season game is a WCHA battle with in state rival St. Cloud State who is expected to be in the third through sixth place scrum along wiht Minnesota.

But like I said above this seems to be an annual theme.  The Gophers always have one of the best freshmen classes in the country and always lose guys early to the NHL.  Typically they start slow and really come together for the playoffs.

Kangas keeping the puck out of the net is one thing.  But are the Gophers going to be able to score more than the 2.29 goals they averaged last year?  Gone are four of their top five scorers from 2007-08 who accounted for 32% of our total scoring.  Coming in is a highly ranked recruiting class headlined by forward Jordan Schroeder.  Schroeder plus what should be a solid junior class of forwards should make up the bulk of our scoring.

One would hope this year's Gophers will have more offensive firepower than last year's seventh best scoring WCHA team.  And based on what Coach Lucia was saying, this will be a different style of play when compared to last year.

According to Gopher Puck Live here is how the scoring broke down by class last season.

When you break it down further to see how much we are losing you see how much we will be relying on this year's junior class to step up AND a shot in the arm from the incoming freshmen.

Everyone is expecting a lot from the incoming freshmen but juniors Jay Barriball and Mike Carman along with sophomors Pat White and Mike Hoeffel need to take their game up a notch and carry the load, especially early as the freshmen get their blades under them.

How does this movie end?

This will not be a WCHA regular season champ.  But come playoff time nobody will want to face the Gophers.  Partly because we get the de facto home ice every year as the WCHA Final Five is held in St. Paul.  But mostly because everyone knows Lucia will have this team playing great come March.

I believe that Kangas will go down as an all time Gopher great, Jordan Schroeder will be the best freshman in the WCHA and this team will be one of the best in the country just in time for the playoffs.

Other predictions and previews