Share All sharing options for: SI's The College Football Book a review 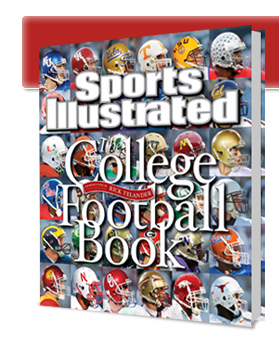 The fine folks at Sports Illustrated have put together an attractive and comprehensive book on the history of NCAA football.  They were also kind enough to send TDG a copy and allow us the opportunity to interview one of the book's editors.  David Sabino took the time to answer some of my questions, below is our brief interview followed by my thoughts on a couple of the highlights of the book.

The Daily Gopher - This is a comprehensive book covering decades, thousands of players at multiple levels.  How long does a project like this take from conception to print and how much were you involved in this?

David Sabino - I was responsible for researching and writing all of the Decade sections, and was the administrator of our voting process for the All-time Team, including coming up with the unique twist of limiting the team to one player per school. From start to finish the process took the better part of six months to write and then an additional couple of months to get printed.  Since The College Football Book was the fourth in this series of books that I’ve worked on (with the Pro Football, Basketball and Baseball), there was less time spent on figuring out how to fill up the pages, and more time dedicated to digging through the material.

TDG - What was the though process behind limiting the team to one player per school?

DS - It gave the team some edge. Nobody wanted to see a team full of Notre Dame, USC and Ohio State Players. Plus, it makes people think on two different planes...by position and by school. Lots of folks say so-and-so should be on the team, but when they’re faced with taking someone off, it gets pretty tough. These truly are the best of the best.

TDG - The list of the greatest players at each position is always a great debate.  How difficult was it for you to compare great players from the 40s and 50s to the athletes that we see today?

DS -  It truly was an impossible task, especially since we went back all the way to 1869 when deciding the team. The game today is so different than games even as recent as the 1970s. Also, with very few exceptions, statistics and individual accolades were close to non-existent in the first 50 years of the sport, so it was difficult to compare those players to those who we have charts and accounts of every play they make. Also, until the 1950s, EVERYBODY played offense, defense and special teams so in that way it was a totally different game than the very specialized schemes of today. Can you imagine how great a player like Bronko Nagurski would have to be if he were able to be an All America at both running back and middle linebacker today?

TDG-How much discussion and dissension was there in the voting on the 50 greatest players of all time?  Any interesting arguments, debates or stories on the inside?

DS - We knew that whatever decisions we made, in a sport as passionate as college football we’d have as many people disagreeing with our decisions as those who agreed, so to add opinions of people who knew the game in different eras, from different parts of the country and from different perspectives, we had a panel of two dozen current and former writers and editors decide the best players at each position. Since we didn’t tell them that we limited the team to one player per school also asked them to name the player who under every circumstance, had to be included on the team. Then a small committee of us sat down and over a week or so, formed the roster. There were lots of arguments. The biggest decision came from Illinois where we had to choose between Red Grange and Dick Butkus, arguably two of the 10 greatest players in the history of the game. Other tough decisions were leaving off a USC tailback. Having no Miami Hurricane or Florida Gator. Choosing the best player from Alabama. Who would be our specialists. With very few exceptions, every decision was excruciating.

TDG-We obviously cover the University of Minnesota here so let's get to the Golden Gophers.  Most people outside of Gopher Nation would be shocked to hear that Minnesota has six national championships, 18 Big Ten championships, a Heisman Trophy winner (two runner ups) and 69 first team All-Americans.  As you were researching were you surprised to learn that the mediocre program we've seen over the last few decades was once one of the dominant programs in the country?

DS - Not at all. In fact there were seven Golden Gophers who had some support for inclusion on the team. In addition to Nagurski, Bobby Bell, Tom Brown, Leo Nomellini, Biggie Munn, Greg Eslinger and Bruce Smith all got mentions.

TDG - As a Gopher fan who appreciates their history even I am a bit surprised that there were that many Gophers to receive mention, especially that Eslinger was in the conversation as one of greats at his position.

TDG-The College Football Book pays tribute the history and tradition of NCAA football.  Nothing displays this better than some of the outstanding rivalries.  We are proud of having three long standing and often (although not recently) heated rivalries with Wisconsin, Iowa and Michigan.  When you take into account longevity and traditions where do these stand on a national level.

DS - Since I’ve written a story for a special issue of SI on the long history of the Minnesota-Wisconsin rivalry and since it’s the most played rivalry, so I personally find it the most interesting. How can people who from states so notoriously friendly hate each other that much? The others have taken a back seat in recent years as Minnesota’s fallen on hard times. I can’t say that from a national perspective they rival Ohio State-Michigan, Florida-Florida State, Oklahoma-Texas, etc. anymore.

(TDG Ed Note: For the record "we" are Minnesota Nice, "they" are drunken idiots, but overall the series is quite even and truly an underrated rivalry.)

TDG-A quick diversion from The College Football book.  As a member of the national main stream media, what are your thoughts on Tim Brewster and where he is taking the Gophers?  This program faces some challenges that other Big Ten schools do not (weak recruiting base, in a city where they are clearly second fiddle to professional teams) but can they get to a level of being competitive in the Big Ten and potentially reaching the Rose Bowl?

DS - You’ve got to be thrilled with the job Brewster has done in less than two years. The biggest thing about being a great coach is believing in what you’re doing and conveying that confidence to your players and recruits. You have to believe that you can win or else you never will. The Big 10 is ripe for a new power to emerge and Minnesota is on the right track. With TCF Bank Stadium on the horizon and a strong young coach, Minnesota is a team to watch in the next five years.

TDG - When you consider the remarkable history and tradition of college football, in your opinion would a true national championship tournament taint what has always been so great or would it just be a new chapter for The College Football Book Vol II?

DS - I've been a proponent of a 12-team postseason-with conference champions plus wildcards making a playoff playing in the current Bowl Venues-for a long time, but since there's so much money involved in the current Bowl System, I can't imagine it having much of a chance, unless the networks throw their support behind it.  I’m a firm believer that championships should be won on the field.

The highlight of the book was their naming of the All-time Team which was a player at each position with the caveat being no school could be represented twice.  Minnesota did land a player on that team and he was Bronco Nagurski.  No real shocker here as Nagurski was the only player in NCAA history to be an All-American at TWO positions in the same season.  Outside of the All-time Team Minnesota was represented well on a few of the All-decade Teams.

Here is the official list of the All-Time Team

The other greatness this book has to offer is of course the incredible photography that we all have come to expect from SI.  The book is page after page of great shots of some of college football's greatest plays and players.

The book is a lot of fun to thumb through and worth the cost of just under $20.  Stay tuned as we will be giving one away in the very near future.