On Sunday, coaches and media gathered for the Big Ten basketball media day. Guess who earned the most coverage? It wasn't Matt Painter's upstart Purdue team. It wasn't Tubby Smith entering year two or Tom Izzo's team that could be a Final Four contender. 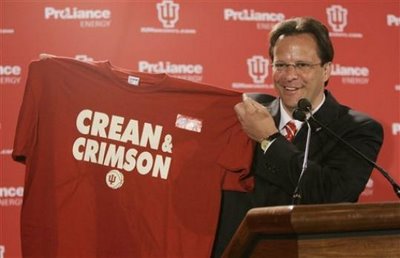 The majority of coverage that found its way to my Google Reader was about Tom Crean and Indiana. On its face, that shouldn't be too surprising. IU is a juggernaut in college basketball and Tom Crean is the latest big-name college coach to enter the conference.

But one storyline really irked me. Apparently, Tom Crean feels like he needs to attack the NCAA and put the NCAA on the defensive for crimes committed by ihs university. The Chicago Sun-Times summed it up best with this piece. The most pertinent two paragraphs (emphasis mine).

He's urging the NCAA, which has yet to rule on possible further sanctions, to realize the program already has paid a heavy price. He's trying to prepare a team that has only two returning players for what promises to be a difficult season. And he's recruiting tirelessly with an eye toward restoring one of the nation's most prestigious basketball programs to its traditional-power status.

''The things you've heard, they were probably worse, to be honest,'' said Crean, who left the comfort and stability of Marquette to take on this challenge. ''But you deal with it and move forward. I really don't want to go back to what's a tired story to me. Now we're into October. We're into our team. The past is the past.''

First of all, if "things were probably worse" than we've already heard, then perhaps someone needs to tell the rest of the story. But my biggest gripe here is the incomprehensible arrogance of Crean to suggest that the NCAA should be leniant on Indiana.

Surely Crean means well. Most of the kids on the roster now had nothing to do with the Kelvin Sampson regime. But, it's not about this team, it's about an institution that knew there were problems and did nothing about them.  They knew Sampson had a history and hired him. And they knew Sampson was skirting the rules again and chose to sit on their hands until the stench drifted far beyond Bloomington, Ind.

When Dan Monson took over a Minnesota program fresh off an embarrassing scandal I don't remember him asking the NCAA to give the University of MInnesota a break. Monson was right, because the University didn't deserve a pardon, even if the kids on the playing floor did.

Now, I think Crean was a great hire. I think there were few better coaches they could have hired. He ran a clean and successful program at Marquette. And before the Gophers hired Tubby Smith, Crean was on my personal wish-list for Minnesota.

That said, this current line from Crean, that the NCAA should now turn its head to the problems that festered during the Sampson era is completely out of touch and should fall on deaf ears.