Share All sharing options for: A Quick Indiana Preview

Since the Gophers went 4-0 in the non-conference portion of their schedule this game is not technically a "must win."  But it would make their margin for error ever slimmer and an upset along the way would become more necessary.  Indiana is arguably the worst team in the conference and while they don't HAVE to have a win, for all practical purposes this is a must win.

As per usual I have tracked down an delusional fan/blogger for the opposing team and asked to get his thoughts.  Fortunately John from The Hoosier Report acquiesced and is on The Daily Gopher hot seat.

1.  When the schedules are released, both fanbases look at this game as a certain W.  It has now morphed from a perceived win to a must win for both teams.  If either wants to get to the magical "bowl eligible" they must win this one.  Is this really a must win for Indiana?

I do think it's a must win for IU.  We cut down our margin for error by losing a nonconference game to Ball State.  Also, I'm presuming that seven wins will be required for bowl eligibility given the way that most Big Ten teams now schedule, and given the unlikelihood that the conference will get two BCS bids again.  As I said on the Hoosier Report, IU's five most winnable games, from most winnable to least, are Central Michigan, Iowa, @ Minnesota, Northwestern, and @ Purdue.  It's not murderer's row, but I haven't seen much from IU that makes me hopeful for 5-0 against that group.  Frankly, all of them feel like toss-ups right now.  And if IU drops even one of those games, we will have to win at Illinois, at Penn State, or at home against Wisconsin.  So yeah, this is a must must win.

2.  Indiana has not won in the Metrodome since 1993, which is oddly only four meetings in that 14 year stretch.  In those four games the Hoosiers have given up an average of 46.5 points per game.  What makes you think this year will be any different than the previous four meetings in Minneapolis?

I still don't have much of a read on either IU or Minnesota this year.  In 1997, IU lost by 12 in a battle of two rotten teams with first-year coaches.  IU's blowout losses in 1999 and 2003 came to Glen Mason's two best Gopher teams.  The 2006 loss is toughest to explain, given that the two teams appeared to be evenly matched (the opposite result would have sent IU to a bowl game and kept UM home), but for whatever reason Brian Cupito absolutely tore us up that day.  Overall, IU has a decent 4-7 record at the Metrodome, but it's been a long drought.  Still, the programs seem pretty evenly matched right now, so I do have more confidence than I had in 1999 or 2003.

3.  I'm not sure your average Gopher fan can name two Hoosiers, Kellen Lewis is your starting QB but who else should we be watching as a weapon on offense and on defense.  Second part to this question, who will be the primary defender of Eric Decker and does he stand a chance?

IU's offense is a work in progress because of the departure of James Hardy.  Tailback Marcus Thigpen has broken some big runs and averages 8.3 yards per carry.  Bryan Payton, who had an excellent game against the Gophers last year, gets some work, and veteran receivers Ray Fisher and Andrew Means have been moderately productive.  Also, tall freshman WR Demarlo Belcher has become more integrated into the offense.
On defense, ends Greg Middleton and Jammie Kirlew haven't yet rediscovered their pass-rushing form of 2007, but against Adam Weber, it sure we be nice if they figured it out.  I don't know who in the world is going to cover Eric Decker.  IU lost its two fine corners, Tracy Porter and Leslie Majors, to graduation.  The only returning corner who had played a meaningful down, Chris Phillips, blew out his knee on a non-contact play against Ball State and is done for the year.  My only two ideas are 1) hold on every play and hope they get tired of calling it; and 2) try to outscore him.  That's why I'm not a coach, but I don't know if there is a good answer.

4.  The Gophers are in the middle of a stretch of "athletic quarterbacks" on their schedule.  Terrelle Pryor last week, Kellen Lewis this week and Juice Williams next.  Of the three what skills does Lewis posses that is greater than the other two?  Why should we fear Lewis most?

I have been busy this fall and haven't seen Pryor play.  I think Lewis is a better passer than Juice Williams and is at least as dangerous a runner.  If Lewis doesn't turn the ball over, he's very difficult to stop, and he can blow up even a well-defended play.

BONUS BASKETBALL QUESTION
5.  Indiana basketball went through a rough stretch to end the season last year.  Will the program ever recover from Blake Hoffarber knocking them out of the Big Ten Tournament?

Of all of the indignities that IU's basketball program has suffered in the last decade, Hoffarber's shot probably doesn't rank in the top 30.  I was bummed when it happened, because I knew at the time that winning the BTT was IU's only hope of salvaging a shred of positive from that wasted season.  Still, I was over it within 48 hours and don't really think about it except when the Big Ten Network makes me.  If anything, it's probably a blessing in that it prevented IU from being eliminated by Illinois, which would have been much worse.  Certainly, Gopher fans know what it's like to see a basketball program decimated by scandal.  IU's 2008-09 team may well be as bad as Minnesota's 1999-00 team (although they managed to beat IU because Joel Pryzbylla played like Bill Walton for a day and then was off the team by the end of the week--if you wanted to jab me about an IU-Minnesota game, that one still sticks in my craw).   Still, Tom Crean is a good, experienced coach, and has a top recruiting class lined up for 2009.  I think we'll bounce back just fine in the long run, but 2008-09 won't be pretty.

When Indiana Has the Ball...

Two names to watch, one for us and one for them.  Kellen Lewis is the guy to stop for the Hoosiers.  In last year's 20-40 loss Lewis rushed for 88 yards and threw for 235.  As if the athletic and talented QB wasn't dangerous enough under center, he is now being showcased at WR, slot and QB.  Finding him on every play and making sure he doesn't beat us will be difficult task.  I would expect that Simoni Lawrence will be asked to handle that task more often than not.  This kind of assignment is exactly why he was moved from safety to a hybrid linebacker.  His athletic ability should allow him to spy Lewis to minimize his legs and he should be able to cover him on pass routes.  If we can contain Lewis and make the rest of their offense try and beat us I think we'll be just fine. 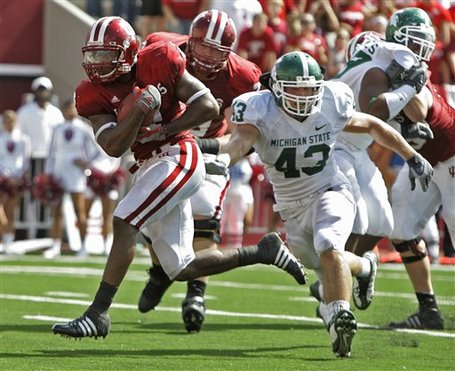 Outside of Lewis we should be ready to slow down tailback, Marcus Thigpen (pictured right).  The junior does not get very many carries per game (yet to reach 10 carries in a game) but he has made the most of his carries and has two 100 yard games on the season including a 78 yard touchdown.

If you look at last week's game home game against Michigan State you might think the Hoosiers are a passing team (44 pass attempts to 28 rushing).  But in their other three games they have averaged 47.3 rushing attempts to 27.7 pass attempts.   Now their leading rusher is Lewis, so many of those rushing attempts may have been designed passes that turned into rushing yards. But I would expect to see them try to establish the run while moving Lewis around and "probing" our defense's weaknesses.

When Minnesota Has the Ball...

We may not want to believe this but Indiana's defense ranks higher than Minnesota's in pass yards allowed and rushing yards allowed.  The general "feeling" that we are just a better football team who should be able to move the ball with ease may not flesh out as easily as we hope.  What I really hope to see is the Gophers establish a dominant rushing attack.  Michigan State's Javon Ringer racked up 198 yards on the ground last week against this Hoosier defense.  You won't see me compare Eskridge to Ringer, but it does show that there are opportunities out there to move the ball on the ground.  Indiana knew they had to stop Ringer and they were unable to.  In this game they will focus on stopping Decker which should give an even greater opportunity to run for Eskridge.

My gut tells me that we will make a concerted effort to run the ball on the Hoosiers and make them stop us before we start using  play-action to move the ball downfield to Decker.  Expect Coach Dunbar to rotate Eskridge, Salamon and Thomas then find ways to use Decker on the ground as well.

Once we get that run game established I am hopeful that we will finally see some production from at least one of the freshmen receivers.  With stories in the Star Trib and Pioneer Press this week about the receivers it is my guess that they will be utilized this week for the first time.  If I am wrong I promise you to not speak of them again until they contribute.

In a word, scoring.  Both teams have more weapons on offense than they do on defense.  Mistakes on offense should decide this game.  The team with stupid penalties on offense to stop drives, turnovers a key moments and the team who is unable to convert third downs will lose this game.  Minnesota has been heavily penalized this year but other than that we have been doing a lot of little things necessary to win games.  Things like converting red zone opportunities into touchdowns instead of field goals and minimizing turnovers has greatly contributed to a 4-1 record.

In a game where neither defense will make a habit of stopping the opposing offense, the offense that gets out of it's own way the most will win.

Despite what I said above I do have some confidence in our defense.  I think that there will be a handful of plays where our defense makes a great play to stop the Hoosiers from moving the ball.  I don't necessarily mean turnvoers, I mean a signifiant open field tackle on 3rd and 4 that forces a punt.  Or a big red zone stop to force a field goal instead of a touchdown.  It won't be every possession, but you'll see it a couple times each half.  These won't be huge momentum changing plays but when we look back we'll appreciate their significance.

I think this team is focused and ready to win their first Big Ten game since November of 2006.