Post Game - Northwestern v Minnesota, that was a buzz kill

"The bottom line was, we didn't play well enough in all three phases to win this football game."

He was absolutely correct, lets break the phases down

Special Teams - The missed a 20 yard FG would have won the game. Other than that we didn't play so bad on special teams but that play was big enough to make a difference.

Joel Monroe - "The snap and the hold were more than adequate.  I know it didn't feel right leaving my foot and it showed."

It is too bad he missed that FG and I'm not going to harp on the kid. This happens at the collegiate level.  It was a chip shot but he just missed it.  I was impressed he was in the room willing to answer questions about it, he was obviously upset with himself and we'll just leave it at that.

Defense - What was frustrating about the defense was that they were unable to contain and tackle the only legitamite threat the Northwestern offense had.

"We didn't get off blocks well and go tackle him and that was basically the name of the game.  They didn't have much other offense other than the quarterback running the option and us not tackling him." 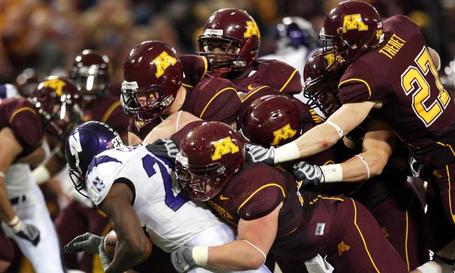 The defense played pretty well other than containing Kafka.  I don't know if he was faster than we prepared for, or quicker than he appeared but we took bad angles of pursuit and let him run through arm tackles all day.

After a couple bad throws that led to two interceptions and six points it was obvious that Northwestern was nervous to pass the ball on us.  Multiple third and long situations were hand offs to Conteh and designed QB runs.  The defense also held Conteh to 12 carries for 12 yards.  This offense had one weapon and one weapon only.  It is too bad that we made them so one dimensional.  We didn't just make the a running team we made them a quarter back rushing team.  It was enough to keep their offense to 17 points, but our offense was only able to muster 10 and that was the biggest problem.

Offense - was unable to establish a running game or block well enough to give our quarterback time to make plays. The entire offense to me comes down to the play of the offensive line.  It is absolutely slowing this offense down.  Surprisingly there wasn't a ton of conversation about it post game but I was able to get a little bit out of Brewster and Adam Weber.

TDG - Is your offensive line being physical enough off the ball.  "I'd say right now, no.  We've gott be more physical to run the ball better.  We've gotta do a better job of protecting the quarterback.  But again we've got temendous youth on our team.  That's not an excuse it just is what it is.  We're not gonna be perfect right now I just want to see our guys improving."

I'm not fully buying youth argument anymore.  These guys had four cupcake non-conference games, they've seen the likes of Ohio State, they've played mid to low level Big Ten opponents and have had a bye week to work out kinks (and heel).  After nine games they should be showing signs of improvement and I just don't see it.

LT - Alford was fine for the most part today.  The one time I really noticed him was early in the second quarter on 3rd and 11.  Northwestern blitzed two guys.  DeLeon Eskridge stepped up in the middle and slowed his guy down.  On the outside Alford moved out to get the OLB blitzing, made contact then was just beat as his man got to Weber and brought him down.  This was just one play that I noticed and pressure wasn't coming from his man all that often but it was a big play that killed our drive.

LG - Orton - I didn't notice Orton much.  Maybe that means he did a solid job but I wasn't focusing on him muh and didn't see guys coming from his spot on pass plays.  Running the ball his hole was often closed and DE never had room to operate on the left side of center. 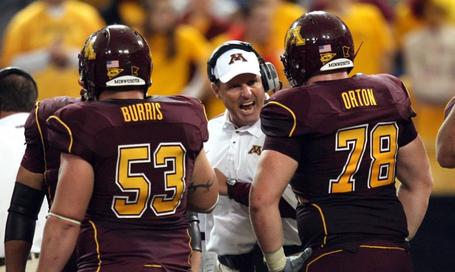 C - Tow-Arnett probably grades out the best in my opinion.

RG - DJ Burris was the recipient of my eagle eyes after I noticed a couple early breakdowns.  A number of plays where Burris would make contact with this hands but then was quickly beat and was left standing with nobody around him looking for someone else to block.  It looked like he was blocking for a screen play but that wasn't the call.  Burris was flat footed all day and his man was often the one putting pressure on Weber.

RT - Wynn, contributed to a weak right side of the line.  In Wynn's defense he was almost always guarding their best DE, Corey Wooten, who is top five in the Big Ten in sacks.  Wooten was consistently trying to beat Wynn around the end.  Wynn was usually capable of keeping him off Weber but there was always that pressure forcing Weber to step up in the pocket and either hurry his throws or tuck and run.  Wooten had just one sack which was his only tackle all day but the pressure was always there.

Weber is confident in his line and sees them improving.

"They are working on different schemes that defensive lines are bringing at them.  I felt like today going agains the best defensive linemen, with the most sacks, I feel like they did a very good job.  I feel like I had a lot of time back there, it just takes experience and time.  They are doing a great job of learning and growing.

TDG - Is it more of a scheme thing or a technique thing they need to work on? - "I would say it's all technique.  It's one of those things that you've got to practice and as you get later into the season it gets harder because you worry about schemes but you have to maintain technique."

The offensive line absolutly has to get better and I look forward to seeing how much the entire unit will improve when Matt Carufel is added next season.  But we have to worry about now and what we can do to win the last three games of the season.  Ultimately Brewster is right that we didn't play well enough in any phase to win the game.  Monroe's kick hurt but we could have done more.  The offensive line was bad but we still had multiple opportunities to score.  The defense played well against the pass but a QB cannot rush for 220 yards on us.

This game was a buzz kill and any momentum heading into the Michigan game was seriously slowed but it isn't the end of the season just yet.  If anything this loss will force them to focus on the task at hand and forget about dreams of Rose Bowls.  Michigan is next and Michigan should be receive their full attention this week.  It will be very interesting to see how we respond to this loss and how well we excute.