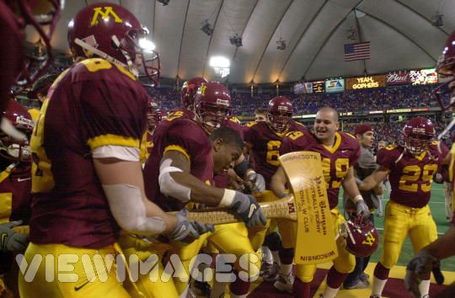 Tim Brewster - "All our trophy games are big games, important games. This one is more important than the rest of them."

The Axe is in the wrong hands and it's time to bring it back to the land where Paul Bunyan created 10,000+ lakes with his massive feet (true story).  Paul Bunyan's Axe isn't the oldest trophy we have (that belongs to the Jug) but it does represent the most played rivalry in all of college football.  Some Madison media likes to propagate incorrect propaganda that Wisconsin leads the all time series...

The annual Wisconsin-Minnesota Border Battle is the longest tenured rivalry in FBS college football. The Badgers are 34-24-3 all-time against the Golden Gophers and have dominated their bitter rivals in recent memory, winning the past four matchups.

This is untrue but don't let the facts get in the way of a good story.  The Badgers lead the series 34-24-3 in the years where The Axe has been on the line.  But the most played head to head series has more than 61 total games played.  Actually Minnesota leads the all time series 59-50-8 but has gone 2-11 over the last 13 meetings to let Wisconsin think they are "winning" this series.

This game is usually fairly heated and fortunately the intensity has been raised with the newly discovered (created?) mutual dislike between Brett Bielema and Tim Brewster.  Maybe it is the recruiting wars spilling over onto the football field or maybe it is just two personalities that clash.  Or maybe it is just because Bielema is a prick...

After the Hawkeyes dispatched Iowa State, 21-7, during Bielema’s senior season in 1992, he met Cyclones coach Jim Walden during the postgame handshake and said, "You’re a big prick. It’s been a pleasure kicking your ass the last five years."

For whatever reason, these guys seem to genuinely not like each other, which should play out on the field tomorrow.  This game is big for fans, for the players, the coaches and recruiting wars that will take place in midwestern living rooms for the next few months.  All of that makes tomororows game great, but what about the actual football game?

After a schedule full of taking on spread teams with athletic quarterbacks like Terrell Pryor, Juice Williams, Mike Kafka (I think I just threw up a little inside) and Kellen Lewis; we now enter the smash mouth portion of the schedule.  All two games of this portion.  This week we take on the Big Ten's best rushing team and next week we get the task of tackling Shonn Greene who dropped 117 and two scores on Penn State.  And when you factor in the fact that we are near the bottom of the Big Ten at stopping the run (8th), you realize these games will be challenging.

Before we get too far ahead of ourselves here are some numbers for Wisconsin and Minnesota.

When Wisconsin has the ball...

In the Badger's five losses whoever has been under center has thrown an average of 30 times.  In thier five wins they have attempted only 20 passes per game.  Yards are about the same, regardless of the game's outcome.  When the run is being stopped and they are forced into passing, that is not a winning formula for the Badgers.  But when the run game is running downhill they can utilize the pass more effectively

and keep the defense off balance.

Keep an eye on guys like Lee Campbell, Garrett Brown, Barret Moen and Kyle Theret.  They will have to plug the middle and not get pushed around.  If the corners are making a lot of tackles or the Badger running backs are getting past the linebackers we are in big (BIG) trouble.  Also keep an eye on the cut back runs as this has killed us.

When Minnesota has the ball...

I don't have any idea what to expect.  Our best offensive weapon is likely not playing which means everybody else has to step up their game.  Much has been made that Brandon Green, Ben Kuznia, Ralph Spry and other WRs have to step up to replace Decker.  But fact is the OL has to step up in a big way, Eskridge has to step things up and Adam Weber better be sharp as well.  I'm hoping we see a creative offensive game plan to keep Wisconsin on their heals.

It seems like the Badgers can stop either the run or the pass, but not usually both.  Shonn Greene (217) and Beanie Wells (168) racked up huge chunks of yards but the Iowa and Ohio St passing games were weak.  But it was the opposite for the Michigan St, Illinois and Penn St games.  Hoyer (252), Williams (217) and Clark (244) had big games while the running games couldn't muster more than 60 yards for any one back.

I do not foresee a big running game, but maybe if Wisconsin is so bent on stopping the passing game that maybe Eskridge breaks a few.  Our offensive line would have to really surprise me for this to happen though.  What I think we'll need to see is screens, options with Stoudermire, swing passes to Eskridge and maybe the use of the tight end in the middle of the field.

I don't know what the successful formula is going to be, but the offense absolutely has to execute better.  They have regressed in the last month and now would be the time to find some rhthym again.

On paper this game does not look good for the Golden Gophers.  Our offense has been struggling for a few weeks and we then lose our best player.  The defense has been solid but I have no idea how they'll react to a power running team, the likes of which we haven't seen this year.  With that said I think we are capable of wininng.  Wisconsin is 2-5.  If we can find some consistency on offense I think we can make this a great game.  If the offense is unable to get more than one first down in the first half then we'll get killed.

The Daily Gopher will be bringing our curse to Madison so be sure to check back Saturday for some updates from the pressbox.  In Minnesota we are debating whether or not to have alcohol in the stadium, but I'm pretty sure in Wisconsin they'll have beer in the pressbox.  I'll let you know!