Share All sharing options for: Minnesota drops a heart breaker in Wisconsin 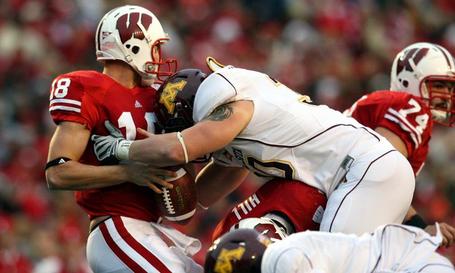 The Gophers are 7-4 but this really feels like an 0-3 team and I think that is unfortunate.  This team just isn't good enough to win games like this unless they make far fewer mistake but they are markedly better than a year ago.  We aren't a BCS Bowl team but we are better and we are competitive.  This may not be enough for some, but we are taking steps and getting back to being competitive is where this program is currently at.

Let's not get too carried away after these last three losses. It was exciting to be 7-1 when they were playing better and more importantly making far fewer mistakes. But this team isn't nearly good enough to win games like this when they commit 10 penalties, fumble three times and give two safeties.

It is interesting how high the expectations were af it was.  They aren't.  What they are is a competitive team what is learning as they go.  Youth isn't a crutch to lean on when they need an excuse but they are sending a lot of freshmen and sophomores up against Big Ten defenses with much more experience.  When Brewster was asked about his young offensive weapons he said...

"Those guys gotta be sophomores, I'm looking forward to them being juniors.  The offensive line needs to continue to grow, get bigger and stronger.  And continue to become a more physical offensive football team"

He's right. They are talented but this team needs to grow and it is hard to compete at the Big Ten level with freshmen and sophomores throughout your offense. 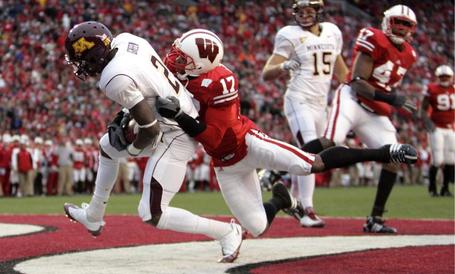 The balance of talent and inexperience of this team what makes this so frustrating.

It was a fun game to witness.   There were some massive momentum swings, big plays and a little fire from both sidelines.  In the end, just too many mistakes made by the team in maroon and gold.

This loss was a painful one for the coaches and players.  It really struck me how much this one hurt.  Even Ruesse commented to me about how there were times during Brewster's post game comments that were genuine.

Coach Brewster - "You can see we've got some outstanding young talent on out team.  It's such a disappointing loss because we had an opportunity to come in here and do something special today and we didn't get it done.  And that's a tough pill to swallow."

Simoni Lawrence - "This hurts, this hurts me the most."

Willie VanDeSteeg - "This the only game I didn't win for a trophy game.  This one is going to stick with me for a little bit."

Those look like just quotes on your computer screen but being there you could really see how this one was hard to take.  The last question asked of Brewster was about Weber

"He's a tough kid, he's a hell of a kid, he keeps competing all the time and you know, you know, I've got big admiration for Adam and...  He hits Green (on 4th and 17) for the big play down the middle of the field..."

And he then paused for a good five seconds looking like he was about to break down because he hurt for Weber. At that moment the hurt he felt for his quarterback and his team was evident in his eyes.  This was one of those moments you don't get reading the paper or analyzing the box score.  This game HURT, this coach hurt for his players.

"We are going to lay on the sword for the next couple days, we are going to bleed this one out.  This one's gonna be tough to let go, but we're gonna fight like crazy to get ready to go and play Iowa and finish as an 8-4 football team."

One week left then likely a trip to a worthless bowl game.  The destination and the outcome is meaningless but the extra month of practice would be valuable for this team and the vast majority of starters who will be returning.