Basketball kicked off this weekend with men going 3-0, Football lost a tough game in Madison but the non-revenue Gopher teams had the best weekend of program.  We won't spend too much blog space on the minor sports but there are some teams that deserve some recognition today.

Women's Soccer made history by winning their frist two games in the NCAA Tournament and making their first ever apperance in the Sweet 16.  The team is 22-3 finishing as Big Ten runner-ups and hosting an NCAA first round regional.  Up next is #1 seed, Notre Dame on Friday.  This would be a remarkable upset, but regardless of the outcome this has been an outstanding season for the lady Gopher soccer club.

The team is balanced in experience and talent as they are led by five senior starters and also start five talented sophomores.  Senior goal keeper, Lindsey Dare, led the Big Ten in Goals Against AVG, Save Percentage and recorded a dominating 16 shutouts.

Women's Cross Country has already won the Big Ten for the second consecutive year but they have not also successfully defended their NCAA Regional crown.  They have won the Midwest Regional by placing five runners in the top 20 and will now send their #7 ranked team to the NCAA Championships hoping to improve upon last year's 12th place finish. This team is led by Megan Duwell, a junior who finished 4th in both the Big Ten and NCAA Midwest Regional.  The team is experienced and should be solid next year as well with five of their top seven runners returning in 2009.

Men's Cross Country was not able to win their Midwest regional, but they did finish second after runners Hassan Mead and Chris Rombough finished first and second to carry themselves and the team to next Monday's NCAA Championships.  The 14th ranked men finished 8th last year in the NCAA's and will ride the legs of Mead and Rombrough this year in hopes of another top 10 finish.

Mead should be looking greatly improve on his 43rd place finish last year.  The Sophomore was the Gopher's first ever freshman All-American and will look to add to his trophy case on Monday at the NCAA Championships. 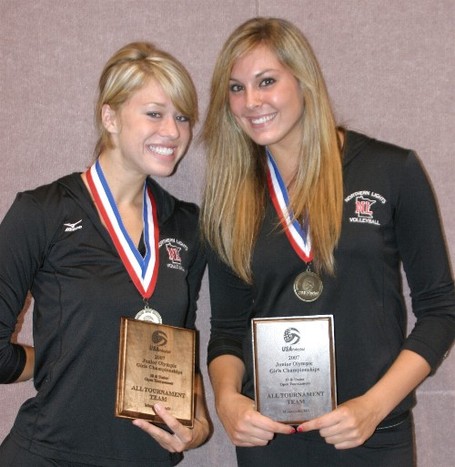 Volleyball is yet to enter post season play, but the women are ranked 15th nationally and are gearing up for a run in the Big Ten and NCAA Tournament.  The Big Ten is being dominated by defending nation champs, Penn State who is 28-0 without having lost even one game.  But Minnesota owns second place in the standings and with a #4 RPI ranking are ready to make a run in the NCAAs next month.

The Gophers are led by sophomores Lauren Gibbemeyer and Brook Dieter (both pictured right) who are seventh and eigth respectively in the Big Ten for points (formula of kills, aces, blocks and blocks against).

All four of the fall minor sports teams are doing great at the national level.   The football has struggled the last month but should be going to a bowl game over the holidays.  All in all a solid season for Gopher sports and the winter teams should be highly competitive as well with both hockey teams and both basketball teams ready to compete with just about anybody.  Wrestling is always a top 10 program.  Swimming and Diving are both ranked in the top 10 in the early part of their season.

As I mentioned above we obviously focus on football, basketball and a spattering of hockey here but these kids are collegiate student athletes in every sense of the term and they deserve a little recognition for their accomplishments this year.