Unbeknownst to most readers, the real Iowa-Minnesota football game won't be at the Metrodome this weekend; it has already been played. After an agreement by Governors Chet Culver and Tim Pawlenty, the two states agreed to take part in an epic gridiron battle. Unlike its NCAA counterpart, this game pits the entire two states against each other; anyone who is even tangentially related to either state is eligible to play for it, whether they be current or former athletes, celebrities, politicians, or even fictional characters. It is THE HATE BOWL.

15:00 - The Gophers begin the quarter with a couple of key offensive subsitutions.  Offensive line play has plagued the Gophers all season and this game has been no exception.  Head coach Hayden Fox benches former Gopher great  LT-Matt Anderle as he was being dominated on nearly every play by Iowa's RE-Rosanne Barr.  This move proved prudent as new LT-Jim Shikenjanski showed far more toughness and tenacity in neutralizing Barr and finally allowed the Gopher offense to move the ball.

Defensive coordinator, Tony Dungy also gets into the offensive action as he leaves the coaches box, puts on a helmet and starts the quarter at QB.

14:40 - The changes pay immediate dividends.  On the first play of the quarter the Gophers line up the Hanson brothers trips left and Randy Moss wide right.  Dungy fakes the dive to Adrian Peterson getting LB- Chad Greenway to bite, fakes the end around to Moss which consumes Bob Sanders, the Hanson brothers take out the rest of the Hawkeye defense and Dungy hits TE-Betty Crocker who goes the distance and puts the Gophers on the board.

14:40 - Special Teams coach, Jim Wacker is no fool.  It only took him a quarter to figure out that Rhys Lloyd is kicking for both teams so he decides to go for two.  The Gophers bring KG over to the offensive side of the ball.  He runs a fade to the corner of the endzone and Iowa corner, Corp. "Radar" O'Reilly stood no chance agianst the 7' Garnett.  The score is 8-15.

12:20 - A quick three and out by the Hawkeyes gives the Gophers ball back inside their own 20.

11:07 - Even with a deep pool of talent to choose from the Gophers are having trouble getting enough players on the field.  Gopher recruiting coordinator, Glen Mason continues to ignore players from Minnesota but comes through for the Gophers going back to his roots and grabbing former Ohio State running back Robert Smith.

7:43 - after a long methodical drive the Gophers score again.  On 4th and goal from the one the Gophers lineup Kirby Pucket at FB.  He clears a huge hole for Smith and the Gophers get their second TD of the quarter.  After the extra point was converted by Dan Nystrom the game is now tied.

7:35 - Iowa brings in Kurt Warner to try and ignite the offense.  Warner is effective getting a couple first downs but has to yeild to Reggie Roby who pins the Gophers deep once again.  The Hawkeye's are really dominating special teams.

7:30 - Minnesota comes out to start this drive with their famous Lipstick Formation.  Split wide left is Jessica Biel and Kelly Carlson.  In the backfield is Winona Ryder and Rachel Leigh Cook.  Gopher fans know this but the Hawkeye defense seems unprepared for this formation of distraction.  They drive down the field scoring on a 27 yard reception.  Jessical Biel beats Iowa corner Kate Austin on a post and the Gophers take a 22-15 lead (ed note: I am really good at editing photos!). 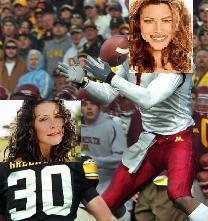 5:49 - Minnesota appears headed for another TD when Paul Krause picks off a pass in the endzone giving Iowa the ball back.

5:33 - On the first play, Iowa RB-Ronnie Harmon fumbles again giving the ball right back to the Gophers.

3:12 - Struggling to move the ball the Gophers decide to use a little razzle dazzle.  Billy Cockerham (two time victor over Iowa) drops back to pass, looks for Judy Garland over the rainbow middle...WAIT its the Statue of Liberty play.  Cockerham hands off to the Pillsbury Dough Boy who rolls over Nile Kinnick on his way to the end zone.  The extra point is once again a little shakey for the Gophers.  Jessica Biel holds for Cockerham, juggles the ball but Cockerham rams it through the uprights.  That is 29 unanswered points for Minnesota and the score as we near halftime is 29-15.

3:03 - Iowa starts their final drive the half trying to regain some momentum before half time.

2:40 - Ronnie Harmon fumbes (again) but the Hawkeyes recover.  Is Harmon throwing the game?

1:55 - 2nd and 2 Iowa hands the ball off to Capt. Kirk.  He is met in the backfield by former Viking (and Hawkeye) LB-Wally Hilgenberg  in what would appear to be a 4 yard loss.  But Capt. Kirk disappears and then reappears 7 yards downfield for a first down.  No flags on the play but the officials warn coach Reagan that beaming up will no longer be allowed. 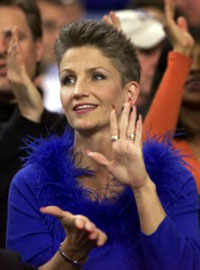 0:08 - The cameras take us away from the game and focus on Kurt Warner's wife.

0:00 - that's the end of the first half with the score 29-22.  I have no idea how Iowa scored as the camera remained on Mrs. Warner so we could see her reaction the last second touchdown.

A real back and forth barn burner.  The battle for Floyd of Rosedale has never been so fascinating.

29-22 Minnesota leads, be sure to check out Black Heart, Gold Pants for the start of the second half.