And let's not waste any time and get right back to the action.

There has been a very long break between quarters as the officials are taking time to figure out that the score is actually incorrect.  After staring into the replay tent for nearly 30 minutes a message appeared on the Metrodome jumbotron.  It is a message from Ashton Kucher telling us all that we've been PUNK'D.  What a hilarious rouse!  Ashton, the scoreboard operator, Wally the Beer Man, Hawkeye State's math skillz and Kirk Ferentz were all involved to pull this one off.

Since Minnesota actually had the seven point lead at ha  lf (not the other way around) as we head into the fourth quarter the score has Minnesota in familiar territory, holding a lead late in a key game.  For the Hawkeyes, former Iowa Cub Mark Pryor has been added to the roster as a back up QB to Chuck Long and Kurt Warner. 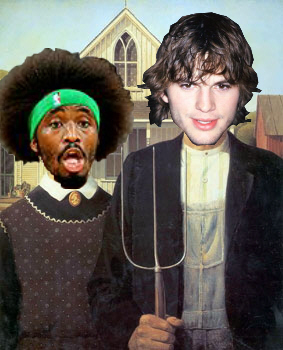 There were some key personnel changes that need to be mentioned.  First of all at half time Iowa LB, Chad Greenway got confused and wandered into the Minnesota locker room.  Since he's now "one of us" he was happy to throw on a Gopher uni and switch teams.

15:00 - Iowa gets the ball to start the quarter and on the ensuing kickoff James Earl Jones throws a key block which springs Kevin Costner for a big return to the Minnesota 35 where he is tackled by new Gopher kicker Donald Igwebuike (yes that is our 17th kicker of the game).

13:36 - 3rd and 4 from the Minnesota 14.  Chuck Long drops back to pass, has time but the Gopher secondary of Tyrone Carter, Joey Browner, Wasswa Serwanga and Clem Haskins has everyone covered like a blanket.  As Long looks back to his left he is met by blitzing linebacker Chad Greenway who knocks long to the ground, picks up the fumble and returns it 86 yards for the touchdown!  Minnesota takes a 15 point lead 34-49 as the extra point is missed and Long is injured on the play (not likely to return).

11:39 - On Iowa's possession they manage one first down on a John Wayne 11 yard run.  But the Gopher defense holds and forces a punt.

9:13 - Minnesota is feeling pretty confident as things seem to be rolling their way.  The Coen Brothers decide to dig deep into their roster and playbook.  At quarterback is Clint Brewster who recently transfered back to Minnesota for this very game.  On 3rd and long from the Minnesota 38 he drops back, avoids the rush by Abdul Hodge and hits his favorite tight end, Tim Brewster at the 50.  Brewster (Tim) streaks down the sideline and is walking into the endzone when out of nowhere CB-Ricky Davis pushes Brewster out of bounds at the 1 yard line.

The Coen Brothers challenge the play.  After confering with replay officials the Gophers are given the touchdown as everybody knows Ricky Davis has never played defense in his life. Rhys Lloyd comes on for the PAT but of course misses and Minnesota now leads by 21 34-55.

9:00 -On the kickoff, Ronnie Harmon fumbles the ball.  The ball is loose.  Kirk Hinrich for the Hawkeys has it stlip through his hands, Tim Pawlenty can't quite get a hold of it for Minnesota, Radar O'Reilly realizes the ball is in the endzone so he wisely punches the ball out of the back of the endzone.  Safety, Minnesota 34-57.

8:55 - Gopher fans are starting to head for the exits as a 23 point lead in the fourth quarter with the ball is virtually insurmountable.  No way the Hawkeyes can come back this late to win this game, it just can't happen.

6:00 - Iowa with the ball, down 23 needs to shake things up a little bit.  With Chuck Long injured and Kurt Warner having to leave the game to catch a flight back to Arizona the Hawkeys turn to Mark Pryor to line up under center.  On the first play of the drive Pryor throws deep to Tim Dwight who is covered by Joe Mauer.  Mauer tips the ball but Dwight comes down with it and sprints into the end zone.  Rhys Lloyd converts the extra point and cuts the lead to 16!  41-57

4:38 - Minnesota once again goes three and out, punting the ball bakc to Iowa.

4:00 - The Coen Brothers ask Glen Mason to come down from the Big Ten Network TV booth and run their prevent defense.  Pryor has no problem picking the defense apart and moves Iowa to inside the 10.  After just a handful of snaps in the game, Pryor of course injurs his elbow and is forced to leave the game and Iowa turns to Jake Christensen to finish the game.

3:55 - Christensen immediately makes a difference as he avoids a Greenway sack and runs into the end zone, touchdown IOWA 48-57 after the Rhys Lloyd PAT.  But on the play Greenway attempts to block the kick, misses, then takes the opportunity to hit Lloyd.  The sheer force of the Greenway hit broke both of Lloyd's legs and he is clearly out for the game.

3:50 - Iowa decides to kick off rather than onside.

2:48 - Minnesota goes into a prevent offense.  After incomplete passes on first and second down the Gophers hand the ball off to Bronco Nagurski who fumbles the ball.  Bob Sanders picks the ball up and runs it into the endzone.  Before the PAT Iowa cuts the score to 3, 54-57.

2:35 - As the Hawkeye's scan the crowd for a kicker they decide to go for 2.  The pass from Christensen to Michelle Monaghan is good and Minnesota's lead is down to 1 with two and a half to go.  56-57.

2:35 - This Gophers hands team is on the field in anticipation of the onside.  The sure handed Troy Williamson and Darren Nelson are on the field.  Williamson is standing near midfield with his hands behind his back, the ball bounces off him and the Hawkeyes recover.

0:55 -The Minnesota defense is finally slowing Iowa down.  Every play is hand off to Dan Gable, who rushes for three yards befor he is tackled by Brock Lesnar.

0:02 - 4th and three from the Minnesota 11 yard line.  Iowa has their new kicker and holder trot out onto the field for the game winning field goal attempt.

After searching through the stands for a viable kicker the Hawkeye coaching staff finds a young man who is clearly wearing Hawkeye colors.  After years of practicing he feels confident in his holder and his abilities to finally kick the ball through the uprights.

Longsnapper Mike Morris's snap is perfect, the holder gets the ball down with laces out.  The kicker rushes the ball ready to be the hero....

The finale after the break! 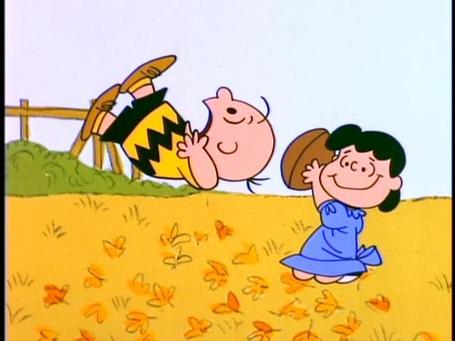 Lucy pulls another fast on one ole Charlie.  This warms the heart of their creater and Minnesota native Charles Shultz.

Minnesota holds on to win Floyd of Rosedale and end their tenure in the Metrodome on the winning end of this border battle!