Share All sharing options for: The Little Brown Jug

Back when I was still with Gopher Nation I started to do a little series on the rivalry games.  The Gophers are unique in that they have three historic and significant rivalries with traveling trophies.  The Little Brown Jug, Floyd of Rosedale and Paul Bunyan's Axe all have great stories behind them and have decades of game resultes painted on their respective surfaces.  Saturday begins the three game stretch as we try to get all three in our possession for the first time since 1967.

The Little Brown Jug is first on the schedule.  I love the story of tLBJ as it is the definition of a traveling trophy.  The Jug was actually Michigan's water jug when the undefeated Wolverine's came to Minnesota in 1903.  Wolverine coach, Fielding Yost feared that the University of Minnesota was going to contaminate his team's water so they brought their own which was purchased for 30 cents. 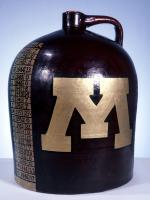 The vaunted Michigan offense was held to six points and with about two minutes to play Minnesota scored one of their own tying it at 6-6.  The fans stormed the field and the game was called ending in the tie.  In the hoopla surrounding the game Michigan left without taking their jug.  Maybe it was accindentally left behind, maybe it was left cause they didnt' want to take it back or maybe it was stolen; nobody knows.

When it was found the next day it was taken to U of MN's athletic director, L.J. Cook.  He decided to paint it and put the score on the side.  The score looked something like this...

Days later when Yost sent a letter requesting his water jug back, Cook replied saying "We have your little brown jug; if you want it, you’ll have to win it."  And the rivalry was created.

Of course since then Michigan has dominated the series leading 65-22-3 and the Jug may be a bigger deal to Gopher fans than Wolverine fans.  I wanted to get the perspective from a few Michigan bloggers so this past summer I asked them their thoughts.

I think the Jug acts as a sort of Michigan gyroscope. If it is in our possession, everything is right with the world. If it is not, things are off balance.

The jug does mean a little something to Michigan fans, I think, but mostly when we've barely escaped with our lives against the Gophers. It meant something after the Buffalo Stampede game and after the 27-24 game when Henne was a freshman (sorry for the bad memories). That something was mostly "relief" and, as you say, "lack of embarrassment." The Jug is us ually an afterthought.

However, in 2005 it was something more. I, of course, was miserable after watching Michigan blow a game in spectacularly inexplicable fashion, but watching the Minnesota players tear across the field to grab it was surprisingly touching. I remember Laurence Maroney going nuts with a flag-planting and each Minnesota player having their turn with the thing. And I remember the next year when Michigan took it back, striding across the field in unison, arms interlocked, to reclaim the thing that had been lost.

I think he nailed it.  If Michigan is playing Michigan football the Jug should be an afterthought.  They have a legitimate rivalry with Ohio State and they have a natural rivalry with Michigan State.  Minnesota has history behind it but the lack of competitiveness has made this a little brother situation for decades.

To most Michigan fans, I would say the Minnesota game is more about beating Minnesota then it is about winning the Little Brown Jug.  Don't get me wrong, winning the jug is important because the history behind it is so great and being able to celebrate with it after a game is awesome, but let's be honest, it's more important because Michigan can't lose to Minnesota.  I'm not saying that in a way that understates the significance of the Little Brown Jug, but back in 2005 when Michigan did lose to the Golden Gophers, fans were more concerned with the fact that U-M was actually upset by Minnesota rather than the loss of the jug.

As far as whether or not this game is on Michigan fans' radar, I'd say only when it is the week of the game.  We don't circle the day of the game on our calendars or have the date memorized like so many do with the Ohio State game, and usually we only talk about Minnesota when Michigan is playing them that specific week.  I don't want to hate on Minnesota or anything, but really the game isn't that important to Michigan fans.  It is seen as a game that Michigan should win every year and that's it.  You cheer for a win and move on to the next game if that happens.  A loss, on the other hand, as we saw in 2005, does bring out talk about Minnesota, but only to discuss what the hell went wrong (damn you, Jim Herrmann and your crappy third down defense).

Overall, winning the Little Brown Jug is important, but mainly because it means Michigan was victorious over Minnesota and didn't lose a game they shouldn't.

Well, this year it is one of those RARE games where we are favored to win the LBJ and this is an opportunity to not only get it in our possession but to keep it for a few years as Michigan falls off our schedule till 2011.

Saturday should be fun and the thought of watching the Gophers (in their gold pants) sprinting accross the field and hoisting the Jug in celebration is really exciting.  Let's not feel sorry for Michigan, there have been dozens of beat downs at the hands of the Wolverines, this is no time to take it easy on them.  Let's beat them, beat them soundly and get the Jug back.