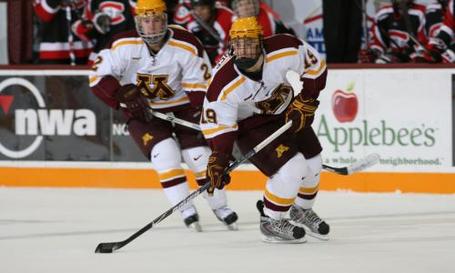 The Slap Shot blog of the New York Times has a great preview of this weekend's series between the Gophers and Tigers.  It is much better than anything I could have written so I'm pretty much stealing from there  .

Currently the Gophers are ranked #2 in the country and are tied for second in the WCHA, trailing Wisconsin by one point.  Colorado College is ranked #9 and are only a point behind the Gophers in the conference standings.

The Gophers are going to be without two of their top five leading scorers in Baribel and Carman.

Losing Barriball and Carman, the team’s third- and fifth-leading scorers, is a blow to the Gophers’ offense. But there’s still plenty of offense on the Gopher bench. As always when watching Minnesota these days, be sure to keep an eye on freshman Jordan Schroeder, who will be playing for the United States at the World Junior Championship in two weeks. Not that anyone is surprised, but Schroeder is the nation’s leading freshman scorer with 19points in 14 games.

On CC's side they'll have one of their hot scorers staying in the top line after Stephen Shultz had a breaking out last week against Minnesota-Duluth.

"It's not just playing with those guys," said Schultz, whose five goals are one more than he had in 21 games as a freshman. "It's going through practice and having to work hard and having to earn my spot. It's not going to be given to me. It has to come every night."

This is a key weekend series for the Gophers but it seems like just about every weekend is crucial in the highly competitive WCHA.  Minnesota's special teams which rank 2nd nationally in penalty kills and 5th in power play should play a huge factor in the series along with the goaltending of Kangas.  Minnesota needs to keep the scoring low, but I predict a 1-0-1 weekend.