If things go as we'd all like, the win against Louisville was the beginning of Minnesota's presence on the national stage. For the first time in years, the Gophers emerged from their proverbial hole, looked around the national st 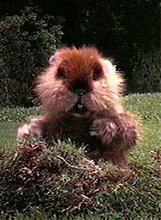 age and felt comfortable enough to keep their head above ground. Or something.

The program had to win on the court to get consistent national attention. We now have that win.

By beating a top 10 team for the first time since 2000, and with back-to-back top 20 national recruiting classes, Tubby Smith's Gophers are set up for big thing and lots of attention. Minnesota's upset of Louisville earned the Gophers the top spot in ESPN's college basketball Weekly Watch section penned by Andy Katz.

A player you might not have heard of, Al Nolen, scored 13 points from the free-throw line. The Gophers got Samardo Samuels to foul out, wouldn't let Earl Clark dominate them and defended the 3-point shot well enough that Louisville was 4 of 17. Foul trouble limited the Gophers' top scorer, Lawrence Westbrook, to only two points; yet the Gophers proved they have balance. Two reserves, Travis Busch and Blake Hoffarber, scored in double figures.

Smith is one of the best coaches in the country. He has a legit shot, like Michigan's John Beilein, to take his team to the NCAA tournament in his second season at the school. The Gophers should go into the Big Ten opener against Michigan State on Dec. 31 undefeated after playing Southeastern Louisiana and High Point. The Gophers open at home with MSU and Ohio State, two preseason top-four teams. Minnesota could end up being one of the last undefeated teams if the Gophers can protect what is always one of the tougher home courts in the conference.

Our Gophers are emerging from a long hibernation, and the college basketball world will soon begin to learn the names of Al Nolen, Damian Johnson, Colton Iverson, Ralph Sampson III and someday soon, Royce White, Rodney Williams and Trevor Mbakwe.