Minnesota holds off Southeastern Louisiana for their 11th consecutive win

Share All sharing options for: Minnesota holds off Southeastern Louisiana for their 11th consecutive win 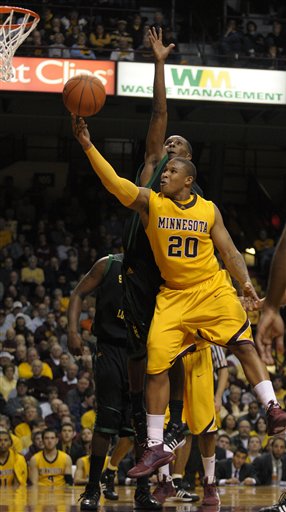 We are enjoying what promises to be a fun season.  Last week's win over 9th ranked Louisville was outstanding without question the highlight to date.  Following that great win, the team earned the first top 25 ranking for the school since 2002.  Up next was a directionally located team from a low-major conference.  This team had let down written all over it.  And that is exactly what happened.

Southeastern Louisiana is an extremely athletic team and their athleticism slowed our offense and made our defense play focused for full shot clocks.  "They were very athletic. We tried to get them under control and we couldn’t always  beat them off the dribble. They were quick and athletic and we had to really work hard to get in their face on shots," said Tubby.

Early it was obvious that we were going to have trouble beating them off the dribble.  In an early possession Nolen dribbled the air out of the ball trying to find a seam to the lane, but he was cut off each time.

Fortunately despite the Lion's athleticism, they were lacking in overall skills.  Offensively they didn't shoot great outside of the lane and defensively they were not great at team defense.  This left Hoffarber open for some key threes in the first half allowing us to maintain a slim margin.  Second half the Gophers shot 57.7% and we were able to shoot our way to the nine point win.

This game was not pretty and I believe this game it was doomed from the time we received the top 25 ranking on Monday.   Tubby mentioned in his press conference that the team was "giddy" this week during practice.  He was quick to point out that they practiced hard and executed well but even Lawrence Westbrook talked about what being ranked means...

"I think it’s exciting for everybody because it’s our first time playing for a ranked team in college. Everybody looks at us as an opportunity to get a big win against a ranked team. We know that we’re going to get everyone’s best shot. But that’s great – I want everyone to be gunning for us because it’s going to make us a better team in the long run."

Hopefully this first game, post ranking, is behind this team and they can get back to the business of improving and winning in the Big Ten.  But this is a young team which I'm assuming is emotionally immature.  LW's comments that this is the first time playing for a ranked team in college is telling.  None of them have been in this position and they'll have to learn to deal with it.  It isn't just about the ranking but this team is being talked about all over the country.

Beating SEL wasn't pretty but they were able to hold them at arms length the entire second half and finished with the nine point win.

Tubby started the game with Iverson and Sampson running a two post offense.  I really like the idea of this but the offense tonight was stagnant and Tubby never went back to having both posts in the game at the same time.  I really wanted to ask him about it after the game but his press conference was cut short and I didn't get the chance.

I'm losing faith in Lawrence Westbrook.  Tonight was a decent game for LW, but his shot selection is not what this team needs.  PJS believes (and possibly accurately) that last year he should have looked for his shot more, but on this team we don't need him taking many of the shots he takes.  In the stat shee they just add to his shot attempts, but in all practicality they are turnovers.

I liked the minutes Devoe Joseph got tonight.  I don't think he had a very good game, but I think this was a valuable game for him to learn on the job.  I intently watched him defensively because the guys he was guarding were so quick.  His defensive footwork is not very good but like I said this was a good game to expose and allow him to work on it in live game action.

After the break there are some stat widgets that I enjoy...