Yes, yes, we know there is a bowl game this week and I realize the coverage has been non-existent.  But we have had a basketball team worth talking about while the football team has had very little to discuss as we limp into the Insight Bowl.

So let this be a footbal dominated Nugz.  I also plan to have a preview up this afternoon for you to enjoy, but first here are links from around the web for you to get your Insight fix.

Very few (if anybody) is picking Minnesota to win this game.  Clearly a Kansas based sight will not be favoring the Gophers but they believe this could (read should) be over by half time.

Simply put, as long as over-confidence doesn't set in, this really shouldn't be a game. I think Tim Brewster deserves a ton of respect for what he's done in a short time there, but Minnesota just isn't that good. We've touched on this some and there's plenty more to come, but in the end it always comes back to that point. If Kansas is focused, energized, and protects the football they'll wrap it up by halftime. If they play sloppy and allow the under-heralded Minnesota defensive line to force some mistakes, then they could be in for a long game. But with Mangino cracking the (hopefully) proverbial whip I'll be betting on the former. Kansas 38 Minnesota 20

If there is one thing I have learned it is that bowl games are never over at halftime!  We'll just leave it at that and move on. 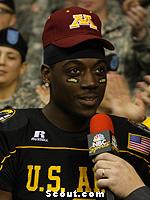 Finally, in addition to the Insight Bowl and the Michigan State game, there is another really big day for Gopher fans coming this week.  January 3rd is the US Army All-American Bowl.  The annual high school all-star game where many of the nation's top recruits share with the world which school they are verbally committing to.  Last year MarQueis Gray announced his "Golden" commitment at this game, but in previous years Gopher fans would have no reason to pay attention to this.  This year there will be two kids who may or may not put a Gopher hat on their head announcing they will be Golden Gophers in 2009.

Michael Carter, a four-star CB, and Bryce McNeal, a four-star WR have held off their announcements until Saturday.  Getting both would be a major boost to the 2009 recruiting class.  Carter has narrowed his list down to West Virginia and Minnesota.  I am feeling confident that he will follow in Tyrone's footsteps and make the trip from Florida to Minnesota.  McNeal is flirting with four schools (Minn, Clemson, Oregon and Colorado).  I am less confident that the local kid will stay home.  My prediction is he will choose another school but transfer back to MN before his career is over.