Since we tip toed into the non-conference portion of the schedule, I'm glad that we are cannon-balling into the conference games.  Depending on who you ask Michigan State and Purdue are the Big Ten favorites (although the Boilermakers lost last night), so there is no easing into 2009.  This will be one of the best games at the Barn this season with some great individual match ups and a chance for the home crowd to witness a potential statement game.

The numbers between these two teams are very similar.  Offensive and defensive points per possession and turnover percentages are extremely close.  Minnesota appears to have a slight advantage on both offensive and defensive eFG% but Michigan State is a much better rebounding team on both ends of the floor.  The rebounding may be the key stat if the Gophers want to have a chance at winning.  We were outrebounded by Southeastern Louisiana and barely outrebounded High Point.  That does not bode well for us against a team like Michigan State.

The players listed are arguably the most talented and deep players in the conference.  Typically Delvon Roe would start at forward but he is likely out with an ankle injurs so I am guessing that Gray will take his place.

This lineup is balanced, compliments each other well and is deep.  I am eagerly anticipating two specific match ups.

Two of the best sophomore point guards will see significant time guarding each other.  Kalin Lucas averaged nearly 15 ppg last year against Minnesota including 5 total threes made and six assists.  Al Nolen did not play the second game but did have seven assists and four steals in this first of many match ups with Lucas.  Both of these guys are quick, play solid defense and are keys to their teams' success. 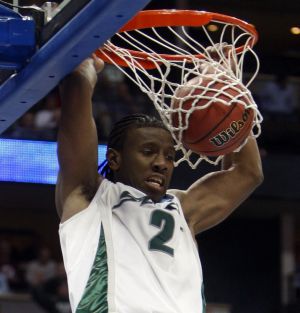 Secondly I am anxious to watch Damien Johnson defend Raymar Morgan.  Morgan is one of the five best players in the conference and had his best game of the season against MN last year when he scored 31 to go with 10 rebounds.  Johnson is not as physical as Morgan but he could excel by denying him the ball as often as possible and not letting him have anything easy in the paint.

Our two best defenders on their two best players makes for some great basketball.

Unfortunately the rest of the Spartans are at the very least more experienced than the Gophers and at some positions more talented.  For the Gophers to win they will need another guy or two to really step up.  Hoffarber and Iverson are the guys who come to mind.  If Hoffarber can get loose and nail a handful of big threes and if Iverson can defend Goran Suton in the paint then we'll be in fine shape to post the upset.

I believe the home court advantage will come into play for the first time in years.  Minnesota plays great D and wins a very close game.