Top Ten Things That Will Happen Once Minnesota Upsets OSU

Share All sharing options for: Top Ten Things That Will Happen Once Minnesota Upsets OSU

Ladies and gentleman, looking ahead to our probable victory this Saturday I decided to do a little soothsaying. The following are events I believe will transpire after the University of Minnesota Golden Gophers best Ohio State.

#10. From the broadcast booth, Glen Mason is clearly shaken, distraught. He doesn't quite know what to say when Justin Kucek successfully punts from the Gophers endzone.

#8. OSU players do what it is they apparently do when they are embarrassed. Get naked. Jump in the shower. Have naked, wet talk. They really do this. From linebacker Marcus Freeman via ESPN.

"But we got in the shower, everybody's disappointed. I forget who was the first person to say something, but it was weird that all of us that had major decisions about coming back were all in the shower at the same time." 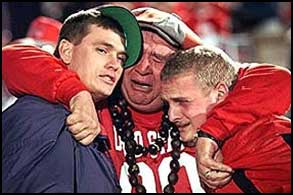 Imagine naked commiserating in shower. Or maybe don't. Your choice.

#7. The Minneapolis and St. Paul newspapers publish more than one article on the Gophers. This probably won't happen. Gus Frerotte starts Sunday for the Vikes.

#6. In full mock mode, the Minnesota band, fresh off a victorious rendition of the Rouser, give each other piggyback rides while waving around bananas. Seriously, tOSU band does this. Weird.

#4. Flamable sweater vest in tow, Brewster decides instead to have it spray painted maroon and gold. He's wearing sweater vest by Saturday evening.

#1. Patrick Reusse forced to retire and is subsequently named Turkey of the Year when Jim Souhan takes over the annual STrib column.