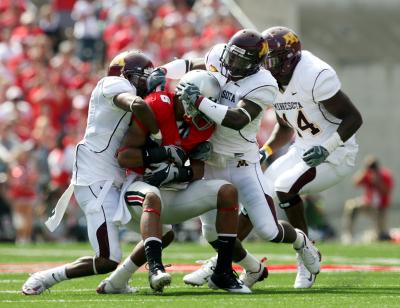 I already gave some postgame thoughts of Saturday's loss but I feel compelled to give greater detail.  Let this be a myth busting, comprehensive review of the game...

At a very basic level this was simply a case of talent beating lesser talent.  The Gophers battled and kept things close for much of the first quarter, but eventually the Buckeyes would wear the Gophers down for a dominating second quarter.  Minnesota would slow Ohio State on first and second down only to give up a big play on third down.  Terrelle Pryor and Chris Wells were hands down the best two players on the field on Saturday and we were just unable to make consistent plays to contain them.

The sky is not falling however.  As per usual, I will find some positives from this loss and the team does live to play another game.  This game tells us something about the 2008 Gophers, but next week will tell us a lot more.

Myth #1 from Saturday - Weber was terrible and inaccurate.  I'm not so sure about this.  Yes, his interception was horribly underthrown and just a bad pass.  But overall I thought his stats were just fine.  He completed 64% of his passes in a game where his primary target was bracketed every single play.  Weber was able to find other targets in an attempt to keep the chains moving.  Kuznia, Simmons and Eskridge all posted season highs (or tied) for receptions in a game.  What was most impressive was how he really led the team and didn't let them quit in the fourth quarter.  I would have liked to see that kind of passion in the first half, but hopefully the sophomore captain will learn from this and be able to come into hostile games more ready to take them on.

Myth #2 - The touchdowns were meaningless TDs against Ohio State scrubs.  Not true.  I went back to game highlites (on Gold Zone) and checked the players on the field for the Buckeyes on the two touchdowns.  I couldn't get all 11 players, but I got most of them.

Starters in the game for OSU - James Laurinaitis (#33), Malcom Jenkins (#2), Ross Homan (#51), Kurt Coleman (#4), Doug Worthington (#84), Lawrence Wilson (#87) and three second string guys that I saw, who saw significant time throughout the game.  Not a total starting 11, but Jenkins and Laurinaitis are two of their best players.

players still on the field including Marcus Freeman this time.

You can argue that they had given up, but that is their problem.  As long as Laurinaitis and Jenkins and Freeman are on the field, I'm not believing that OSU was subbing down.  If those three aren't the first ones off the field when subbing down then Sweater Vest's vest is too tight.

The Simmons Fumble, was truly huge.  The picture on the right shows that there are five red jerseys surrounding Simmons, including three in front of him stopping his momentum.  In my book 1 vs. 5 is a clear stop of momentum and the play should have been whistled dead.  I am in no way suggesting that this caused the loss or had the play been overturned we would have been right in it.  No, with this catch and first down we still would have lost.  But with 2:36 left and a first down it would have certainly negated the last OSU TD and we would have gone into half time no worse than 13-3.

The offense really doesn't grade out all that well, but it wasn't terrible either.  Like t

he defense it just came down to losing out to superior talent.  We had to grind out drives, being forced into third down 15 times.  Without some big plays or momentum swings we just can't grind out a full 60 minutes with Ohio State.

Same story as the offense really, just couldn't keep up with OSU's talent over a full game.  There were times when the defense played well and times when they just lapsed and gave up huge plays. The first OSU drive i  s a perfect example.

at this point it isn't so bad.  We are keeping them in front of us and getting them to third down, over time this would be a good thing.  Then all hell breaks loose.

This was typical to me of what we endured on Saturday.  Defense was OK, then gave up a huge play which snowballed into more huge plays. 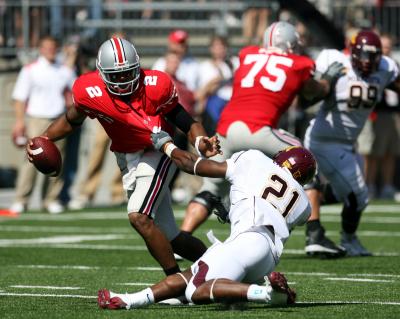 Unit of the week goes to the defensive line.  Garrett Brown had a good game stuffing the middle (most of the time), Eric Small had a sack and Willie VanDeSteeg was often putting pressure on Pryor.

In the secondary Traye Simmons had a couple breakdowns but overall he made some really nice plays in the secondary.  Kyle Theret and Simoni Lawrence were on the cusp of making big plays all afternoon but usually just missed the elusive Pryor.

I was disapointed that buys like Lee Campbell and Traimaine Brock were rather quiet.  For us to have a chance I thought that Campbell was going to have to really stuff the run and Brock was going to need to make a big play or two.  Both were trailing on plays more often than not.

If this is the best team we see all season, then one can hope that this will be the worst defensive performance we will see.  Illinois could be uglier as Juice Williams is as similar to Pryor as you will find, but they don't have anybody who scares me like Chris Wells scares me.  414 yards given up is a lot, but continuing on the theme of improvement it is 55 yards fewer than what we allowed a year ago at home to the Buckeyes.  Different numbers, same result but we just aren't ready to compete at that level.

1.  From what I have read, Glen Mason has received mixed reviews on his commenting in a game between his two great loves.  I maybe took a little editorial liberty there, but whatever.  I thought he was OK.  The constant mentioning of "when I recruited him out of high school..." got rather old because we all know that Glen Mason didn't waste him time recruiting.  With both Beanie Wells and James Laurinaitis I'm sure it was "hey what about Minnesota?"  To which they replied, "I'm thinking about Ohio State."  And Coach Mason would probably have said, "OK, have fun.  You'll love it there."  Other than that I thought he was fine, he gave some decent analysis and even would have made Bert Blyleven proud with a pre-snap call of an OSU play that went for big yardage. 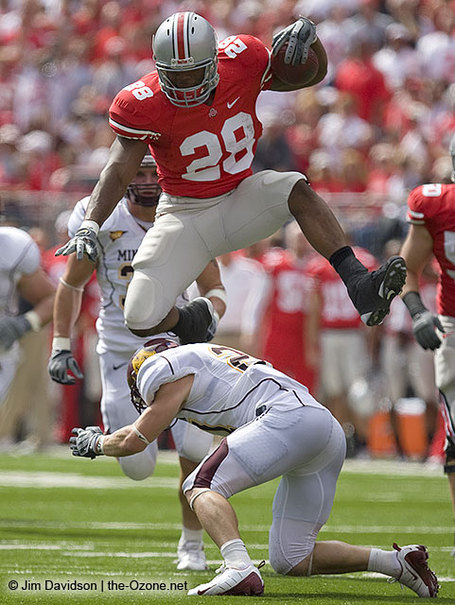 2.  I know that we were on the receiving end of the the following plays, but they were kind of fun to watch.  Beanie Wells' Hurdle (picture stolen from Men of Scarlet and Gray) and Terrelle Pryor giving a shot to Rex Sharpe were pretty sweet.

3.  A lot was made of the turnovers being -1 for the Gophers, but I'm not sure that was such a big deal.  We gave them an extra possession but they one they gave us with easily within scoring distance.  We absolutely should have turned that into six points.  The Weber interception was really bad timing but on the road against a great defense one incerception on the day is not the end of the world.

4.  Hats off to the Buckeye defense on Eric Decker.  He was covered all day on each and every play.  Malcom Jenkins is very good and he had help which made things tough on Decker.  Weber adjusted and found Simmons and Eskridge more often on key plays.  The Simmons "fumble" was a really nice first down pickup on 3rd and 7 as we were driving to hopefully score before the half.

5.  It was nice to see DaJon McKnight get that touchdown late.  I don't believe that he was in bounds but whatever.  What I liked was that he is a BIG target.  If he can move and get open and get on the same page as Weber he could really turn into a big target for us.  This was just one play and he hasn't seen the field much but I will now include him in my list of freshmen receivers I want to see get some action.

I've pretty much said what I needed to say about the OSU game.  Kent Youngblood nailed it when he wrote that the Gophers' response to this game will have season long ramifications.

"We won four weeks in a row," Brewster said of the Gophers' nonconference start. "You get used to winning, the feeling of winning. Then you lose. And so, OK, now how are we going to respond to losing?"

Putting this behind us, learning from the mistakes and getting ready to beat, not compete with, Indiana will tell us a lot about the 2008 Gophers.