The rumor mill is churning with potential candidates to fill in as our new offensive coordinator.  One of those names being circulated is Jeff Horton.

This is NOT announcing Horton is the new guy, he is just rumored to be on the list.  But if he gets hired my story would go something like this...

Horton Hears a Who 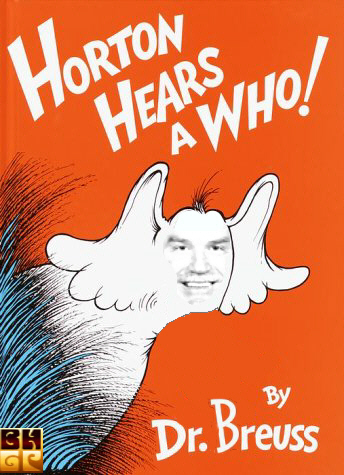 On the 14th of Jan, in the cold cold great north,
Tim Brewster, the man, decided to bring forth
a new coach, to replace coach Mike Dunbar
to lead his spread offense and hopefully take the team far.

He listed the qualities he wanted to hire,
someone smart and creative who he wouldn't have to fire.
He wrote down a list of guys fitting the bill,
he thought long and hard on this vacancy to fill.

So Brewster searched all day and all night
He offered the job to guys like Heupel and Applewhite
He was often turned down and he couldn't figure out why?
He was losing all hope and was starting to cry.

But then in a flash as he was talking to Pam Borton,
he thought, "I should call the Rams and chat with Jeff Horton."
He has coached for the Rebels, the Badgers and Wolfpack
he has coached the O-line, the receivers and quarterback.

His new coach spent seven years coaching QBs in Wisconsin
while there he surely did more than drink bourbon, scotch and gin.
He learned many things like dancing the Macarena
and of course he helped them twice to Pasadena.

Horton has also been coaching the pros,
think of all the great plays that he knows.
He'll teach us the fade and the fly and the post
but I'm hoping we see the flea flicker the most.

As Tim did his homework he found something more
Horton has already coached at Minnesota back in '84.
He once was here and when he worked for Coach Holtz
he might want to come back and give this program a jolt.

Horton inherits an offense with many returning
he gets Decker and Weber and young kids who are learning.
He'll be coaching the spread but he better be able to run
or he'll likely be dead and watching this team will be no fun.

He hails from Texas which helps in recruiting,
hopefully he'll add talent to this team for which we'll be rooting.
This hire isn't exactly a big splash that was promised
but it may work out, don't be so negative you doubting Thomas.

Many in Gopher Nation may say, "What the puck?"
But before we pass judgment we should just say "Good luck."
Horton may know what he is doing and he just may succeed,
this guy will be tremendous, tremendous indeed.

A special thanks to OPS over at Black Heart Gold Pants who was kind enough to create the lovely image on the right.  He is talented, handsome and smart (for an Iowa guy!).  Be sure to check out their work as it is often smart and always entertaining.