Jedd Fisch...Get to know him

Share All sharing options for: Jedd Fisch...Get to know him 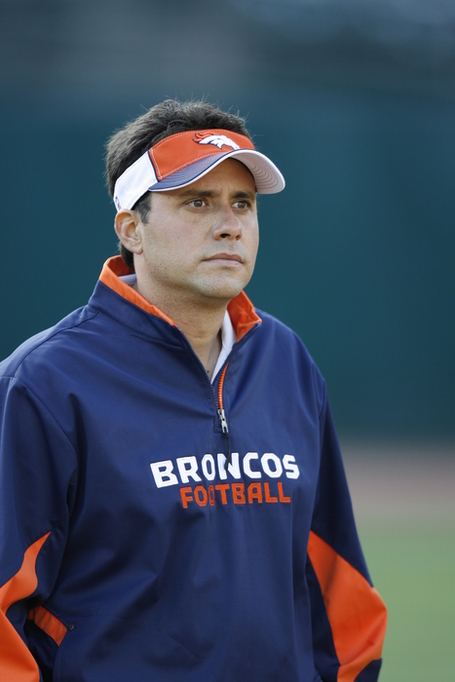 Jedd Fisch is your next Gopher offensive coordinator.  After an exhaustive search that promised us a "kill shot" of a hire, we land Fisch who comes to us from the NFL.  Last season Fisch was the wide receivers coach in Denver.

Here is a brief outline of Fisch's career.

He has quality professional experience coaching positions on the offensive side of the ball.  What he is lacking is coordinator experience, recruiting experience and any significant experience at the NCAA level.  Let's get to all of that in greater detail.

"Jedd has an unbelievable personality. He’s a guy who will do a great job recruiting. He has great people skills, he’s very charismatic and very smart. He’ll be a head coach some day, on either the collegiate or professional level. That’s how highly I think of him."

"Minnesota is getting a great one. Jedd is one of the brightest coaches I’ve ever been around. He will bring great energy and experience to the program at Minnesota. The kids there will love having him as a coach.

Second, he is young with a bright future.  Obviously the quotes above are going to be complimentary as those coaches knew their quotes would be for public consumption.  But I am inclined to believe Shanahan and here is why.  Many will be quick to jump to the conclusion that Brewster made this hire because he and Fisch coached together in Denver.  But they were not on the Denver staff together so this hire is largely based on Shanahan's recomendation.  Brewster places such a high emphasis on recruiting I find it fascinating that he's hiring someone who has not been on a recruiting visit since the end of the Clinton administration.  But he trusts and respects Shanahan so he must have received a strong recomendation for Fisch.  Hiring a coach you have never worked with is very rare, he had to come with sime high praise from others

Thirdly, we weren't the only ones to consider him.  A year ago he was interviewed for the UCLA offensive coordinator job and just recently he was considered for the Detroit Lion's OC opening in the last couple weeks.  We were the only ones to hire him, but at least this isn't like he we are hiring a tight ends coach as a head coach or anything.

He seems to have his stuff together.  There were a LOT of complimentary quotes in the official release from guys like Jay Cutler, Dom Capers, Eddie Royal, Brandon Stokely and Brandon Marshal.  They all said he's a great guy, helped their careers, etc.  But the one thing they all had in common was their emphasis on his attention to detail and preparedness.

Stokely - "He was always very prepared for every situation and he had us prepared, as well. He’s a great mind. He knows the game inside and out."

Cutler - "He is extremely detail oriented and helped us put together a game plan each week to put our receivers in a position to make plays."

Marshall - " "He had us prepared week in and week out. He’s a guy who got the best out of me, no matter what."

Royal - "He had us very prepared for every game. He really put in the work, so that we knew what we needed to know about the other team every week.""

Capers - "Minnesota has a very bright, innovative young coach. Jedd is very professional and is a very good communicator. He is one of the brightest young guys I’ve ever been around in the profession."

At first glance and on the surface this is not an exciting hire.  The more I do the homework on Fisch the more l like the hire, but the vast majorit of Gopher fans are going to say "WHO?"  Then they will dismiss this as a poor hire and move on to something else.  Brewster's unique approach already has most skeptical and this program has an uphill climb to respectability just within this market.  This hire will do nothing the help that and they will have to really get things accomplished on the field to get people behind the team.

He really has no experience with the spread offense.  I know there has been a lot of talk about becoming a power running team.  But at no point has Brewster said they are abandoning the spread.  They are just adding some power attitude and power formations.  Now they hire an offensive coordinator who has been in the NFL.  I'm sure he has a great offensive mind and this isn't going to be beyond his grasp.  But if our OC is learning while he's teaching I'm just skeptical how effective he'll be early on.

Overall I give this hire a thumbs up.  He is young, he is detailed, he is a good teacher and he seems to have a bright future ahead of him.  I've never heard of him and 99% of the people reading this have never heard of him but I really hope that is never a prerequisite for who gets hired to coach our favorite college football team.  What our offense actually looks like will be fascinating, especially early in the first couple games next year.

It is really hard to type a serious post while you spend two hours watching the season premier of LOST.

I will let this take the place of the Nuggets for today since this is pretty significant event.  Share your thoughts on the hire...

GI.com has a brief interview with Fisch.