Share All sharing options for: Minnesota vs. Purdue - TDG Preview

This game takes on more meaning after the Northwestern loss on Sunday (although with the NU win over MSU last night maybe it doesn't look as bad).  Purdue began the season as the Big Ten favorites but a late December to early January period of injuries and less than stellar play saw the Boilermakers lose a couple in a row and narrowly escape the NU trap in Evanston.  But they appear to be healthy and a full strength Purdue squad that is starting to play better is a scary thing for Gopher fans. 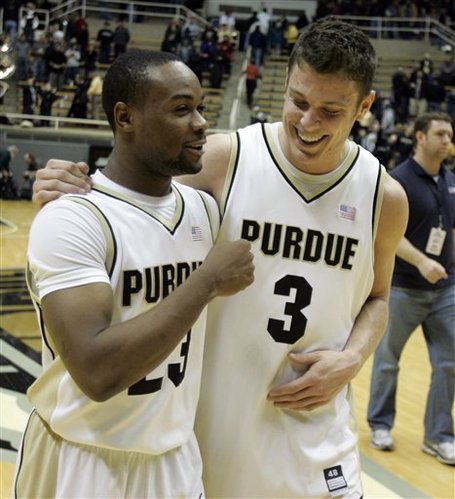 Purdue is #1 in the country in defensive eFG%.  Scoring has been a problem for us at times and tonight appears as though it will be no different.  The defensive charge is led by Chris Kramer the 6'3" JR Guard is typically a starter but has not started since returning from his injuries (back and foot) in December.  The guy scores very little but seems to relish being the best defender in the Big Ten.

Fortunately for the Gophers, Purdue plays a bit more up tempo and I believe Minnesota can play that game with them.  A slower, grind it out tempo, like Iowa plays, is harder for the Gophers to score.  If we can keep the tempo moving we should still be able to score some points.

Rebounding has really been our biggest issue all season, although it has been much improved in the last couple weeks.  Looking at the stats we might be able to hold our own here.  Much like the NU game we should have an advantage on the offensive glass, but it of course takes some effort and a lucky bounce or two.  Robbie Hummel is second in the Big Ten in rebounding so getting a body on him has to be a priority.

Insight from the enemy...

I forced Travis from Off the Tracks to answer a few questions for me concerning this game.  He was kind enough to respond and if you want more his official preview can be found here.

TDG - Match up you are most looking forward to watching?
OTT - Chris Kramer defensively on Al Nolen. An offense can be disrupted so much if you simply take away the distributor and not the scorer. Nolen is one of the best distributors in the league and if we can deny him from starting things it will help.

TDG - Biggest thing that concerns you about the Gophers?
OTT - Your size. You have a pretty big front court and outside of Calasan and Johnson we really don't have much size. That hurt us against Illinois.

TDG - Advantage Purdue should have?
OTT - Our 3-point shooting has been solid of late, but I know that it comes and goes.

TDG - Which team has more blocked shots tonight?
OTT - Minnesota should, bu JaJuan Johnson was a shot-blocking machine against Northwestern. They were terrified to get within five feet of him.

TDG - Who wins and why?
OTT - I picked Minnesota by four simply because I don't have a good feeling about this one. We looked a little too good against Iowa. then again, if Northwestern can win at Michigan State...

I think I agree with Travis that the Nolen/Kramer match up will be fun to watch.  He is accurate in noting Nolen is not a great scorer of ours but he is what makes our offense go.  If Nolen has several turnovers we are in trouble, but he can win this match up by drawing a few fouls on Kramer and getting into the lane on penetration.  Let's not forget that Nolen is pretty good on defense as well so he'll be interesting to watch on both ends of the floor.

I will also be intrigued to watch Iverson and Sampson in the paint against JJ Johnson.  Johnson is a shot blocker so how will the freshmen big men react when they get a shot or two rejected?

What will have to happen for Minnesota to win...

I'm not going to go down the road of predictions anymore.  As I research and write the previews I am always able to convince myself that we can win, regardless of the team or venue.  Instead, I'll lay out what has to happen for us to win.

1 - do what we do best.  Simple right?  We turn teams over, we block shots, we score in transition and we make big threes and we defend like crazy.  We can't try to be what we are not.  We are a defensive team that plays well together on offense.  We don't have anybody on offense who can carry us on a consistent basis, we can't rely on 60% shooting and we may have to win with Hoffarber staying cold.  But if we maintain our identity and make things difficult for Purdue we can find a way to win this.

2 - Rebound!  This we do not do so well, but we have been better lately.  After getting outrebounded by 22 to Michigan State, we have outrebounded or been even with our next five opponents (OSU +12, Iowa +5, PSU even, Wis +1, NU +2).  This is an area we are improving and we need to stay even on the boards again tonight.  We have been very good on the offensive glass all year, but it is the defensive glass that we need to keep clean.  If we give Purdue double-digit second opportunities it just means we'll have to be that much more efficient and proficient on the offensive end. 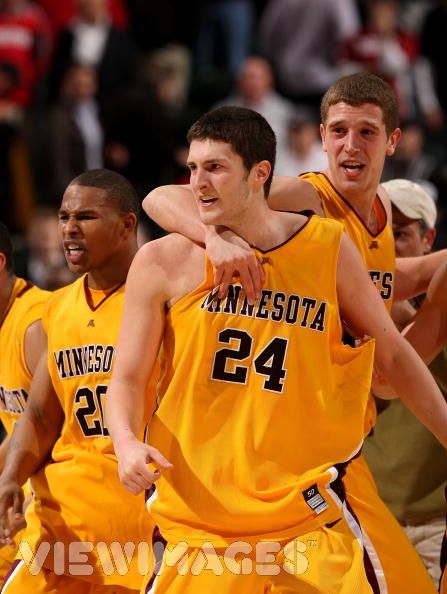 3 - Somebody step up and score.  I'll expect typical scoring nights from Westbrook, Nolen and Johnson; combining for about 30 points.  But we need some help from someone else.  Hoffarber breaking out of a 2009 slump (bet you didn't know that he won an ESPY and was nominated for another.)?  Boscick or Carter taking advantage of the ESPN2 air time?  I'm expecting a down night for our big men as long as JJ Johnson is on the floor.  But someone on the perimeter needs to step up and score.

4 - Put Northwestern behind us.  That was a let down game and HOPEFULLY a wake up call.  We can't show up and beat anybody, we have to execute and avoid slopiness.  Hopefully that message was sent this week and received.  Presumably this was the game they were looking ahead to, so the hope here is that they spend the week truly getting ready for it.  Take out the NU loss on Purdue and make a statement!

This should be a really fun game.  Purdue is a fun team to watch as they are talented enough to beat anybody in the country.  They have their issues, but don't we all.  If they can take care of some of their issues there is no reason they couldn't make a Final Four run in March.  We are fortunate that they appear just once on our schedule and it is at home.  This would be a huge win or a respectable loss (assuming we keep it respectable).  Enjoy the game and tomorrow we will enjoy the win!