Share All sharing options for: 20 games down, 10 to go

I'm not sure anyone would disagree that that Gopher hoops has exceed all of our expectations.  Clearly the loss to Norhtwestern was disappointing but the wins over Louisville and Wisconsin  more than make up the one we dropped on the road.  Through two-thirds of the season we are sitting at 17-3.  Barring a collosal collapse we are a lock to make the NCAA Tounament for only the second time in a decade.  But as we learned in football the final portion of the schedule can have a significant impact on the season in totality.  Let's take a look at the remaining schedule and see how things may  play out.

If you are a current member of the Gopher basketball team please stop reading, you are not allowed to look ahead (I'm talking to you Travis "What Else" Busch).  Looking ahead and separating the certain wins from the tough games is the right of  fan but when teams or players take part in such an endeavor they will certainly underachieve and ruin the lives of passionate fans all over the North Star state. 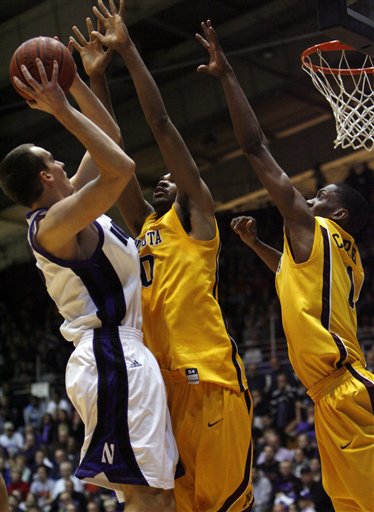 Remianing schedule with some games as certain wins/losses...

Among the 10 remaining games I am going to declare just three locks for wins and two very likely losses.  Indiana, Northwestern and Michigan at home should all be wins.  Clearly we could drop one with a horrendous night or a Manny Harris 35 point performance but the smart money is on these being wins at The Barn.  I'm also going to declare @ Michigan State and @ Illinois as certain losses. The Spartans dominated us at home and I don't expect anything different in East Lansing.  And don't even try to convince yourself that Illinois is beatable in Champaign, the last time we won down there was 1978.  Is it possible to win either of these?  Absolutely.  We will play competitively and may pull out an big upset but I'm not going to hold my breath.

This puts us at 20-5 with five remaining games that require some commentary.  All five are winable but on their own all five are losable as well.  Listed below in order of likely wins...

Overall I'm going to say worst case we finish the season 4-6, giving us 21 wins.  That would likely mean we need a B10 Tourney win to get into the NCAA Tourney.  22 wins with a win at Madison and over L'ville should be enough.  The kind of defense we play would make it hard to imagine losing more than 6 of the remaining 10.

What do you guys think?  What valuable piece of info am I missing here?  Who do we beat in the remaining 10 games?