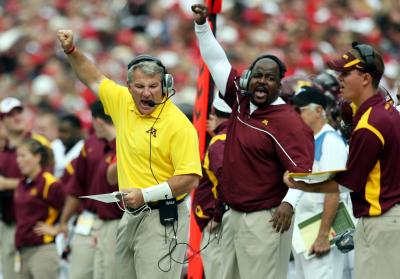 So within a few hours we lose Mike Dunbar and Ted Roof.  The guy who was one of Brewster's first hires and the guy who was given credit for saving the defense in 2008 are now unemployed and moving to Auburn respectively.

On their own neither of these losses will keep me up at night.  But when viewed collectively along with the job change of Withers last year this is alarming.  Brewster has churned through three coordinators in two seasons.  Maybe all of these should be viewed on their own merit and it is just bad luck that Brewster is losing his most important assistants every year.  Or maybe there is something going on behind the scenes that is prompting them to leave or at least take jobs that come their way.

Either way this is really tough for a program to endure.  Many other Big Ten programs have coordinators who have been in place for several seasons which creates continuity for the staffs and removes any surprises for the athletes.  Kids get into the program and know year in and year out what to expect. When you have an experienced team you can really expand your playbooks because you have already put the time into teaching the core.  But when you hire new coordinators every couple years you are taking a step back every time.

I realized that Brewster has been with the program all of two years so he has not had time to build up a cohesive staff that is loyal and has shown longevity.  But this is just too much.  Look at this progression on the offensive during Brewster's tenure.  After wasting 2007 to adjusting to the spread and then spending 2008 teaching it to young wide receivers and linemen we get to start over again in 2009.  Whoever is brought in will likely be a "spread guy" but the spread is a vague term and beyond formation everything could be different.  His system could be drastically different and much of what has been learned under Dunbar will be wasted.  I'm sure guys like Weber and Decker will pick things up quickly as they seem to be prettty savvy and it isn't like they are switching to the wish bone, but as a whole this unit will be staring over in spring practic.

Defensively we will have our third coordinator in three seasons of Brewster (really fourth in four years for the upper classmen).  There is more talent now than in years past but once again it will be new philosophies and schemes.  The players will spend the spring learning a new system and hopefully will be able to execute it by late August. Idealy these guys could be in position to make more plays next year as theoretically they'd be thinking less and playing more.

With a team returning most of it's starters on both sides of the ball, what would have been ideal is the opportunity to build on what was learned in 2008.

Brewster is promising a splash, especially with the offensive new hire.  There are plenty of names floating around out there on message boards.  Guys like Dana Holgorsen of Houston or Tony Franklin of Auburn who are spread gurus all the way to names like Mike Shanahan or Tony Dungy or even David Lockwood :).  But rather than a couple of sexy hires of guys who will not be here for long I'd love to see someone who knows what they are doing but is lkely to be in the TCF coach's box for a few seasons and is committed to building this program.