The Gophers head on the road for only the third time this season and for the first time in the Big Ten.  I am labeling this as a must win game as Iowa is likely to finish in the bottom three in the conference.  If you want to make the NCAA's then you have to win these kind of road games.  It is not truly a must win, if we lose it does not kill the season and doom us to the NIT.  But it is a game where a loss does far more damage than a win will do to the positive.

If you are looking for an up tempo game with plenty of scoring then you better watch the BCS Title game tonight because this game is likely to be full of shots near the end of the shot clock and with plenty of free throws attempted.  I'll get to those specifics in a minute. But first...

Iowa is efficient scoring 1.137 points per possession and shooting 57.4 eFG%.  Their problem is pace.  They do well per possession but they rank second to last in all of NCAA D1 basketball averaging just 58.4 possessions per game.  This is the pace they choose to play.  Defend like crazy and be a good three point shooting team is Todd Lickliter's formula.  It works best when he has more talented players, but is also gives them a chance against more talented teams if can slow you down and hit a couple big shots.

This is small ball.  Get guys who can shoot and defend on the floor.  Iowa will take a LOT of threes tonight, they lead the Big Ten by a lot, attempting threes on 48.2% of their shots.  You read that right, nearly half of Iowa's attempted shots are from behind the line.  Notice Devan Bawinkle, one of the few bench players who sees significant minutes, he has taken 57 shots on the year and all 57 of them have been from behind the arc.  Don't expect him to take a two!  If Anthony Tucker ends up playing keep an eye on him from down town as 80.8% of his shots are threes.

I've talked about it already but the Hawkeyes are going to take a lot of threes and they are going to make the Gophers earn everything offensively in the halfcourt.  If there is anything that worries me about this game it is that we have not been a great half-court team on offense.  Regardless of the lineup we have trouble scoring in a half-court set and it is worse when Tubby has some of his head-scratching lineups on the floor (JAS+Busch+Hoffarber+Williams+Joseph for example).

We can really take care of business if we can control the tempo a little bit.  I may not say this very often but against Iowa we need to speed things up as much as possible.  Make baskets, get into a press, force turnovers and score in transition.  Or we also need to transition from defense to offense as fast as we can.  After Iowa's made shots or a defensive rebound get the ball down the floor quickly and get them on their heels defensively.

If this does get into a half-court game it will be interesting to see what kind of advantage we can have in the paint and if we will try to take advantage of this potential advantage (yes I used advantage three times in the same sentence).  Iowa's tallest player is freshman Andrew Brommer off the bench.  There should be ample opportunity for Iverson and/or Sampson to do some damage in the lane on both ends.

Here is another thing you won't hear me say very often but, another person who may really help us out tonight is Lawrence Westbrook.  He is prone to turnovers but he is always keen on speeding things up offensively.  If nobody else is being aggressive to the basket you can guarantee LW will take that opportunity to get his shots. 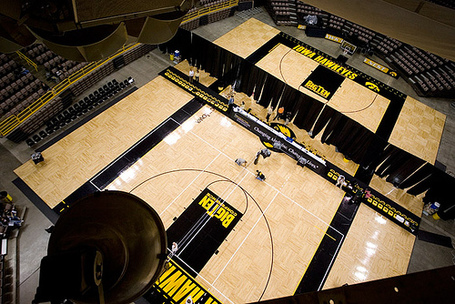 Finally, making free throws may also be a significant key tonight.  Iowa also leads the Big Ten in fouls per possession.  Through their first 15 games they averaged 58.4 possessions per game and 17.7 fouls per game.  That equates to committing a foul on 30.3% of their possessions.  This leads the Big Ten by a significant margin, Northwestrn is second at 27.6%.  Minnesota isn't exactly laid back on D, they are fifth at 26.75%.  All this means that this game should see a good number of free throws attempted.  Tubby, if you are reading this, foul Brommer (22.7 FT%)!

This comes down to controlling tempo and rebouding.  I know I didn't specifically touch on this above because this is a key for every game.  We offensive rebound well and suck at finishing possessions with a rebound.  Get some O-boards, quicken the pace of the game and don't let one of their shooters get hot.  Simple right?

We have not won in Iowa City since Feb of 2002 so I'm not going to assume anything.  I believe we are the better team.  We should be able to use some of our strenghts to an advantage.  And it should be noted we play pretty good defense ourselves.  I think we get the important conference road win.