Your new defensive coordinator is...

Share All sharing options for: Your new defensive coordinator is... 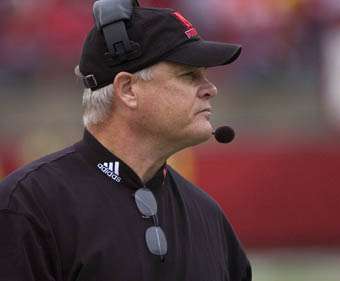 Kevin Cosgrove (and Ronnie Lee promoted to co-DC).  I assume you read other sources that provide Gopher news (if you don't, I was just kidding there are no other Gopher sources just stay here).  And if so you have probably heard that this was rumored for the last day or two.  Cosgrove and Brewster have a hist

ory, Cosgrove has a extensive history coordinating a defense at BCS level schools (Wisconsin and Nebraska) and Cosgrove has a decent reputation as a good recruiter.  Add those together and what was a quick hire.

ensive coordinator," Brewster said. "Coach Cosgrove brings a wealth of experience in the Big Ten as both a coach and recruiter. Plus, he possesses a long track record of developing outstanding defenses. But, perhaps more importantly, Kevin is a great person and an outstanding fit on our staff.

"Ronnie Lee has done a tremendous job since joining our staff here at Minnesota," Brewster added. "I’m very pleased to reward him with this promotion. Ronnie has proven himself to be an excellent coach and recruiter. I look forward to him having an expanded role on our defensive staff."

Kevin Cosgrove will be sharing his defensive coordinator duties with defensive backs coach Ronnie Lee.  We will talk more about Lee and his role in the future, but this post will focus on Cosgrove.

This hire does not come without controversy and opinions, of course.  Kevin

Cosgrove's most recent position was on Bill Callahan's staff at Nebraska.  2007 was his final season and it was statistically the worst defense in Husker history.  Cos was disliked by nearly everyone, hated by a few and had his life threatened by one.

I queried the author of Husker blog, Corn Nation to get his thoughts.  John didn't have much good to say about Cosgrove and pointed out that the biggest critique of his defenses was that it couldn't defend the spread (gave up 76 to Kansas in his final year).  That is very concerning as the Big Ten is all of a sudden full of spread teams.

The bottom line on Cosgrove is this - we knew that with him we'd never have a great defense. Since Callahan was supposedly an "offensive genius", the idea was that the defense would be good enough to win games. What a fantasy, especially in 2007 when the defense fell down so badly.... like I said, worst defense in Nebraska history. At the end of 2007, it was like they were throwing guys on the field who hadn't a clue as to what they were doing. Is that all Cosgrove's fault? No, but as far as I know, he's never said boo about it after the fact.

CN also conceded that Callahan was a control freak and may have handcuffed Cosgrove a little bit.

There are few things that I really like about this hire.

This hire brings me mixed emotions.  Nothing about this hire has me fired up that this defense is going to be rock solid and one of the best in the B10.  But Cosgrove does bring some things to the table.  Obviously time will tell.  If the Tim Brewster experiment ultimately fails there is a good chance that this hire will be looked back on as one of the reasons he was unable to take this program to another level.  But this may also be a great fit for Cosgrove and he'll be in a situation to succeed.  The co-title with Ronnie Lee may be the most encouraging news in this hiring as his secondary experience and having been through the Big Ten for a couple seasons should  help a lot.  But as usual, these things will play out on the field regardless of what you or I think about it.