Share All sharing options for: Gophers overcome slow start to dominate the Boilermakers 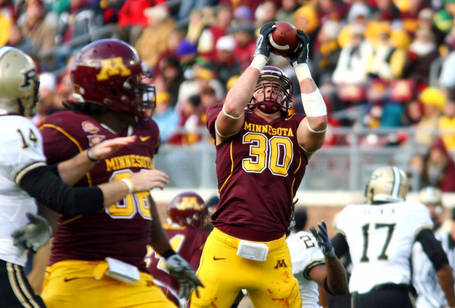 The first quarter caused some serious angst for Gopher fans (see open thread here).  Purdue converted third downs all the way down the field and jumped to a 10-0 lead as the Gopher Mulligan Offense managed just 52 yards of offense, zero points and very shakey quarterback play from Adam Weber.  But for the second consecutive week Purdue greatly regressed after their hot start, giving the ball away and the Gophers dominated the rest of the remaining three quarters in all phases of the game.

After the 10-0 start the Gophers routed the Boilermakers to the tune of 10-35.

After the ugly start very little went wrong with the offense.  The Mulligan Offense still reared it's ugly head with some occasional plays called that made you scratch your head.  But the offense committed just one penalty after the first quarter, the OL played their best game of the year and Adam Weber threw one pick but completed 4/6 with a touchdown run.  He wasn't asked to do much (and he didnt') as the Gopher ground game really took over.

The pass defense was not very good.  Purdue put 5 guys out in patterns on a regular basis, and that is not easy to defend but guys were wide open and we benefited from some dropped passes.  And the 61 yard TD to Keith Smith was a complete breakdown in coverage (Kim Royston).  That stuff can't happen regardless of the opponent or score differential.

Adam Weber was pretty bad.  It has been well documented here that I am in Weber's corner (though the luster has worn off), but he was pretty bad today.  Fortunately the running game was good enough that we didn't need him to do much with his arm.  But that won't be the case the next two weeks, he better get his head screwed on straight or the next two weeks will be ugly.

The run game was great today.  Whaley averaged nearly 10 yards per carry and as a team we racked up 200+ yards. Kevin Whaley and DeLeon Eskridge each scored a touchdown and the offensive line really opened some holes for all three backs to run through.  The lone pass worth writing about, the 47 yard pass to Eric Decker, was only there because of a great play-action fake and all kinds of time for Weber to throw it deep.

Finally a comfortable win.  The 20-35 final was Brewster's most comfortable Big Ten win in his tenure here.

It was cold and we played like a cold weather team.  The question is, did you have your dad'gum chillie hot?\

Post game it was pretty clear that everyone was pleased with the big plays, complete game by the defense, special teams and the offensive ground game.

Brewster - "Obviously when you block a field goal for a touchdown, special teams plays a big role in that.  Again, we were very opportunistic.  We did a good job converting situations where they gave us some really good field position.  When you run the ball successfullly good things are going to happen.  We talked to our team about eliminating the self-inflicting wounds.  I thought they did a really good job."

Special Teams were great but the running game was the story of the game.  Kevin Whaley and the offensive line both played their best games of the year.

"He (Whaley) did a nice job.  He really does a nice job sticking his feed in the ground and making cuts.  I'll tell you he's a physical guy for his size and we're really pleased with him."

He may have propelled himself to a lot more carries and the opportunity to be the feature guy.

All in all this was a nice bounce-back win for the Gophers.  A sluggish start but it rolled to a comfortable win and we showed some ability to run the ball effectively.  Clearly we have some things to continue to work on especially heading into Penn State, but 2-1 in the Big Ten and this team still has a real opportunity to get 4 wins in conference despite some of our deficiencies.