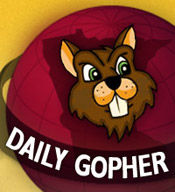 I want to use this morning's Nugz to highlight some of this week's TDG content.

Hockey season starts tonight.  I am not a huge hockey guy but I LOVE that the Gophers don't pussy-foot into the season.  Last year I believe they kicked off the season with a Wisconsin series and this year isn't any easier with a trip to North Dakota.  JG has a North Dakota series preview here, and below are his other season previews.

And let's not forget about basketball season.  This promises to be a very successful season for the Gophers who have an outside shot at a Big Ten title and a realistic shot to win a few games in the NCAA Tournament.

And now back to some regular Golden Nugz!