Lining Up the Stars Versus Penn State

Share All sharing options for: Lining Up the Stars Versus Penn State

Had Minnesota not scheduled a game against California earlier this season, Penn State would be the first team featuring powerhouse talent that the Gophers face this season.  Penn State enters the contest ranked 14th in the nation, with their only loss having come against 11th ranked Iowa.  The Nittany Lions have been a bastion of college football talent for nearly 50 years, and 2009 is no exception.

In 1999, Minnesota's last second field goal victory versus Penn State in Happy Valley was heralded as a program-changing victory for the Gophers and a career-launching milestone for Glen Mason.  Ten years later, Minnesota is a middle-of-the-road Big Ten team.  After making a few bowl games, the fairy tale ended when Glen Mason didn't land the Ohio State job in 2001.  Gopher football then hit a plateau of low-level bowl game seasons.  In 2006, the talent on the team was wearing thin due to poor recruiting, and the season imploded with a devastating loss to Texas Tech.  Exit Glen Mason, enter Tim Brewster.  Once again, Minnesota enters Happy Valley with few giving them a chance at victory.

So, how does Minnesota stack up versus Penn State on offense?  Let's take a look at the Rivals.com star ratings for the players who will see most of the playing time: 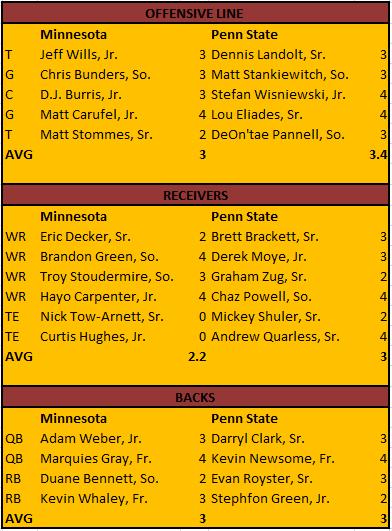 Penn State features an offensive line that should be dominant, which is to be expected from one of the top programs in the nation.  Based upon player ratings, Penn State would seem to have a better corps of receivers.  Eric Decker may be one of the best two star recruits to ever play the college game, so the disparity in star ratings amongst the receivers may not translate to the field.  Looking at star ratings, Minnesota and Penn State appear to have an evenly matched group of quarterbacks and running backs.  However, Darryl Clark's senior leadership and Evan Royster's running game should trump a Minnesota team with a struggling quarterback and a trio of young running backs.

Let's look at the defenses: 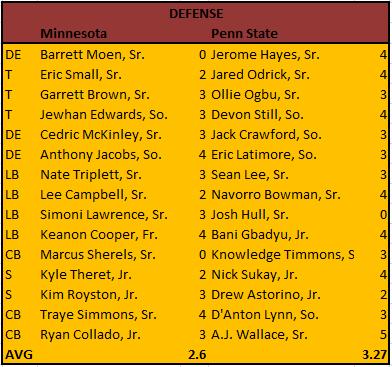 If Penn State's defensive line doesn't catch your attention, you're looking at the wrong chart.  Minnesota may be facing the best defense that they have faced all year.  While Penn State hasn't had a particularly difficult schedule, they are only allowing 10.2 points per game.  Their mature defensive line and seasoned linebackers will probably wreak havoc on the Gopher running game.  Remember the childhood football game "500," where one person throws a ball up in the air and everyone else fights to catch it?  Expect several "500" throws from Adam Weber in the direction of Eric Decker on third and long.  Eventually, Penn State's talented defensive backfield will grab one or two.

If there is something that could keep Minnesota in the game, it is their defense.  Minnesota has played very good defense this season against some talented offenses.  If the Gophers can contain Royster and force Clark to make bad passes, they could keep the game close.

Penn State's defense is too good for Minnesota.  Even if Minnesota's defense can keep the game close early on, they will wear down as the game goes on and the time of possession inevitably favors Penn State.  Prior to the start of the season, I predicted a 35-14 Penn State victory.  I'll stick with that prediction for tomorrow.