Lining Up the Stars Versus Wisconsin

Share All sharing options for: Lining Up the Stars Versus Wisconsin

Heading into Saturday, the speculation regarding the matchup between Minnesota and Wisconsin has reached a fever pitch.  While there are occasional exceptions, recruiting class rankings are usually a good predictor of future success.  Let's take a look at the Rivals.com star ratings for the players who will be making most of the plays for Minnesota and Wisconsin.

The offensive players compare as follows: 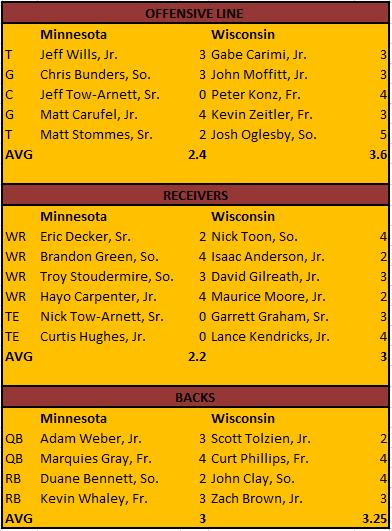 Based upon the star rating system, Wisconsin appears to have a more highly skilled offensive line.  Wisconsin's strong running game in the first four games of the season, along with Minnesota's struggles running the ball, would be in line with these numbers.  Solely based upon star ratings, Wisconsin would appear to have a better receiving core.  Take into account that Eric Decker may be the best receiver in the Big Ten and Nick Tow-Arnett's emergence as a sure-handed tight end, and the two teams may actually be evenly matched.  John Clay has lived up to his four star rating this season, and along with a strong offensive line the superior star ratings for Wisconsin's running game are probably accurate.  The quarterback situation will be interesting to watch, as Scott Tolzien has been anointed by many analysts as one of the best quarterbacks in the Big Ten.  His supposed quick release, excellent decision making, understanding of the game, and ability to fool defenses will be on display tomorrow.

As for the defenses: 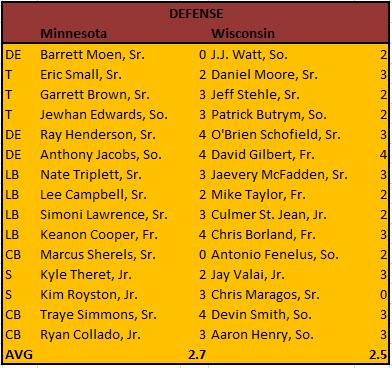 Both teams appear evenly matched on defense when looking at their star ratings.  Minnesota's front seven appear a little bit stronger, which will be helpful against the Wisconsin power running game.  Wisconsin's defensive backs will be tested by Minnesota's pass-happy offense, and their ability to contain Eric Decker may determine the outcome of this game.