Lining Up the Stars Versus Michigan State

Share All sharing options for: Lining Up the Stars Versus Michigan State

This Saturday will be the litmus test for the Gophers' 2009 season.  A win gives them a legitimate shot at a 7-5 record, whereas a loss will likely lead to a 6-6 or 5-7 record.  The battle of All Hallows' Eve will determine whether or not a warm-weather bowl game lies ahead for Gopher fans.

Both Michigan State and Minnesota enter the contest with 4-4 records, and both teams have had up-and-down seasons.  As an interesting side note, both head coaches Mark Dantonio and Tim Brewster started their tenures in 2007.  So, how does the talent on the field compare for these two teams?

Let's take a look at the offenses: 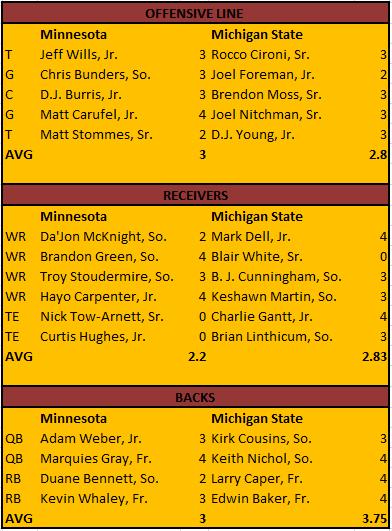 The teams appear evenly matched with regards to the offensive line.  Minnesota has had a tough time pass blocking and running the ball, so this similarity may be deceiving.  Michigan State clearly has more highly rated players as receivers and backs.  With the emergence of Kirk Cousins as a premiere Big Ten passer this season, expect the Spartans to take to the air frequently.  And if the Gophers focus all of their attention on the pass, there are two four star running backs waiting to exploit pass defense formations.

And for the defenses: 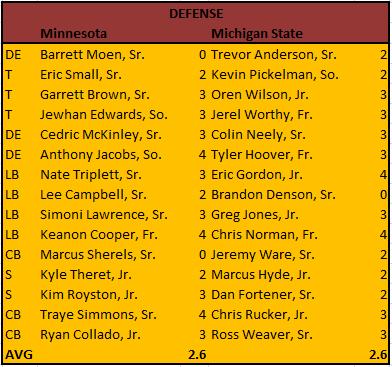 Michigan State and Minnesota appear to have evenly matched talent on defense.  Both teams have had good defensive showings this season.  This game will likely be determined by the team with fewer turnovers and the edge on offense.

Prior to the start of the season, I made the following prediction for this game:

Mark Dantonio has done a great job of recruiting at Michigan State, as has Tim Brewster at Minnesota. Unfortunately for Gopher fans, Dantonio has better upperclassmen from the previous regime. Michigan State wins a close one 34-30. (4-5 record)

This is a tough game to predict this week due to circumstances with the Gopher offense.  I'll have to give two predictions:

1. If the Gophers show up with similar personnel and play-calling, Michigan State wins 24-10.

2. If MarQueis Gray is ready to play quarterback and fields over half of the snaps, Minnesota wins 24-17.