Share All sharing options for: Do Recruiting Class Ratings Matter?

Die-hard fans of college football have often heard opposing opinions regarding the ranking of college football recruiting classes: "I know of a player who was a two star recruit, and he's awesome so rankings don't matter!," "Penn State and Ohio State get all the blue chip recruits, that's why they win," "Boise State didn't have any five stars on the team when they beat Oklahoma, so only the coaching matters!," and "USC, Florida, and Alabama will always be in the hunt because they always have highly rated recruiting classes."

Well, what is the actual correlation between recruiting class rankings and results?  For the purpose of exploring this question, let us take a look at the Big Ten in 2008 and 2009.  Of the available recruiting class ranking services, I've chosen to use Rivals.com for the sake of convenience and simplicity.  I used the total class score for the analysis, since it takes into account both the class quality and the class size.  I did not account for recruits who were transfers and non-qualifiers, since I have a full time job and don't have that kind of time on my hands.  While not exactly precise, every team loses players for a variety of reasons.

First, let's look at the 2008 season since there is a full twelve games to analyze.  The recruiting class scores were statistically weighted for years in the program (seniors have a greater impact than freshmen), and averaged out accordingly for the current Big Ten teams.  Here's what the graph looks like regarding what teams should have the best talent on the field: 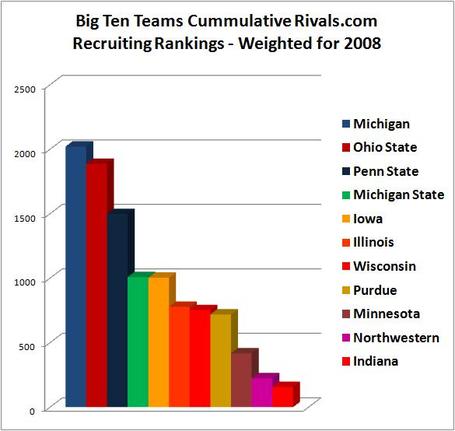 As you can see, there appears to have been three distinct tiers of talent in the Big Ten in 2008.  Tier 1: Michigan, Ohio State, Penn State; Tier 2: Michigan State, Iowa, Illinois, Wisconsin, and Purdue; Tier 3: Minnesota, Northwestern, and Indiana.  So, how did these teams perform in relation to their talent levels?: 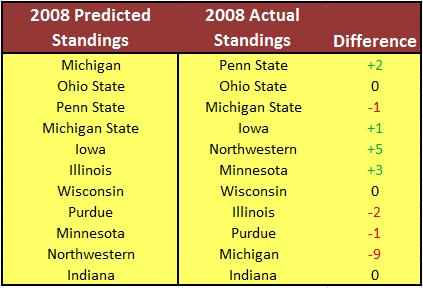 With the exceptions of Northwestern and Michigan, every team finished the season within three positions of what their talent levels predicted.  Northwestern and Minnesota were the over-achievers, while Michigan was a catachlismic underachiever.  Granted Michigan was in a transition year, but they only managed three wins despite having some of the most highly rated players in the country. 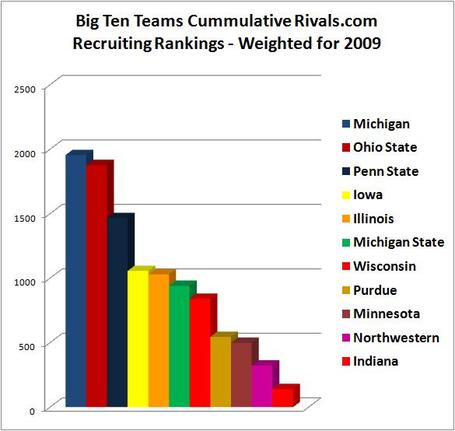 For 2009 there are still three tiers of talent, with Purdue dropping down to the third tier being the only major shift.  Yes, the 2009 conference schedule is barely under way.  Let's still look at how the teams are stacking up versus this prediction.  I just list the team records, since after two weeks of Big Ten play there isn't much accuracy in the rankings: 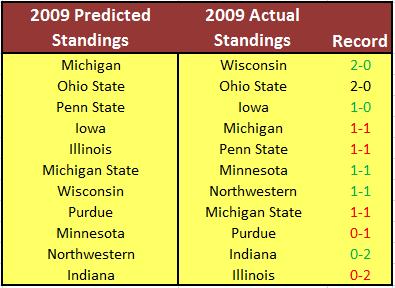 Taking account that Michigan is still in a "transition" to the spread offense, it is no surprise that Ohio State, Penn State, and Iowa are in the Big Ten title hunt.  Wisconsin, at 5-0 overall, is outperforming expectations so far.  However, they have a tough run of games coming up starting with Ohio State.

The bottom line is that recruiting class rankings have a significant influence upon where a team finishes in the final standings of the conference.  Coaching can on occasion make a big difference in a team's final standings, such as with the 2008 Northwestern and Michigan teams.  Those scenarios appear to be the exception to the rule.  Out-coaching a team that has faster, stronger, and bigger players is a tough mountain to climb.  Based upon this analysis, recruiting class rankings seem to be a very accurate way to predict a team's success.