Much has been made the last few days about the lackluster student attendance at TCF Bank Stadium in it's inaugural season.  The empty seats are not only embarrassing for the brand new, on campus stadium; but it is lost revenue for the athletic department and seats that many Gopher fans and alumni would be happy to purchase.  I knew this was an issue, did not know it was to be a story in the Star Trib this week, but I did take a couple snapshots of the student section on Saturday late in the 1st quarter. 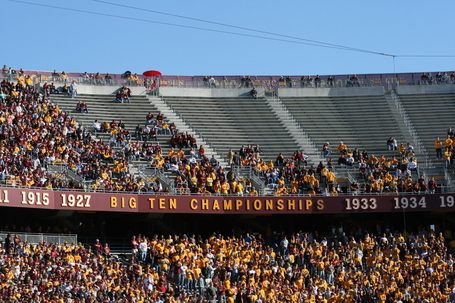 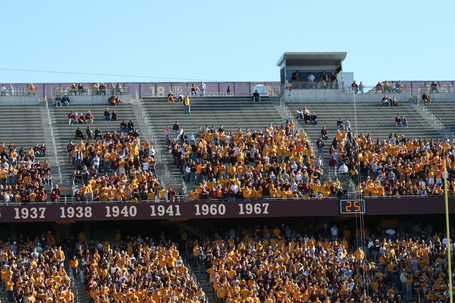 As you can see those upper-deck sections are about 30% full.  Most of the previous home games have not been that bad but they have clearly been missing students, who pay a fraction of what a normal ticket would cost, and they are costing the athletic department significant revenue.  There are many who think they have the answer, but ultimately the students need to get off their asses, get to the stadium and support their team.

This is pretty sad that we are unable to fill up a slice of the stadium ring.  It is a great perk to be able to purchase tickets for major college football at such an incredible rate.

On another subject, the key to the entire game last Saturday was the 2nd and Goal play on the 1.  Fortunately I took a couple pics of that disasterous play where we chose to NOT pound the rock! 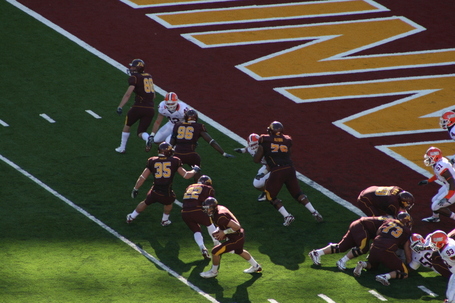 Look at how there are four Gopher blockers for two Illini defenders and then three O-linemen knocking down #56 for Illinois.  Also notice how #93 is already waiting for Weber before he even gets his head turned around.  As I looked through my pictures from Saturday I thought this one was pretty interesting.