On September 5th The Daily Gopher team published our predictions for the 2009 football season.  You can review the story at this link.  For this post, I'll review what our preseason expectations were and how we've fared.  First, let's review a chart of our predictions compared to actual results.  Predictions that would have resulted in a winning bet as either a win/loss prediction or a pick versus the Vegas betting spread are highlighted in green: 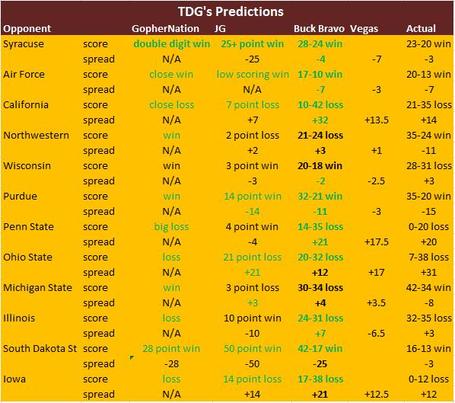 While the manner in which the 2009 squad ended up at a 6-6 record was disheartening for many fans, all three of us at The Daily Gopher had expectations within one game of the actual final record, and JG was on the money when he predicted a 6-6 record:

As for whether we called the wins and losses correctly for individual games, we all had winning records but GopherNation was an incredible 11-1:

Versus the official Las Vegas point spread, I ended up having a 7-4 record.  There was no official line versus South Dakota State, but had there been I probably would have been 7-5 since I expected Minnesota to win that game by a landslide.

The 6-6 regular season record is disappointing due to the way in which the team, especially the offense, fell apart as the season progressed.  Hindsight is always 20/20, but I'm not ashamed to boast that the TDG team had good foresight for the 2009 season back in September.