Share All sharing options for: Sagarin Ratings and Football Trends

USA Today's Jeff Sagarin has been using statistics to rank sports teams for over 20 years.  Sagarin's ratings take into account several factors such as the difficulty of a team's schedule, and not just their final record.  Let's take a look at Minnesota's Sagarin ratings from 1998 through 2009.  I was unable to locate the 1997 ranking, so Glen Mason's 3 win 1997 season is not included in the graph.  The lower the number, the better the team:

Although Tim Brewster's inaugural 2007 season was horrendous, 2006 had seen a drop in ranking that was headed the wrong way.  For 2009, Brewster has the Gophers back to about the 2000 or 2001 level.  As can be seen from the graph, Minnesota's strongest team since 1998 is the 1999 squad.  What about that 10 win 2003 season?  Why isn't it ranked higher than 1999?  In the following graph from the last seven seasons, 2003 featured only two top 20 quality opponents, both of whom defeated the Gophers: 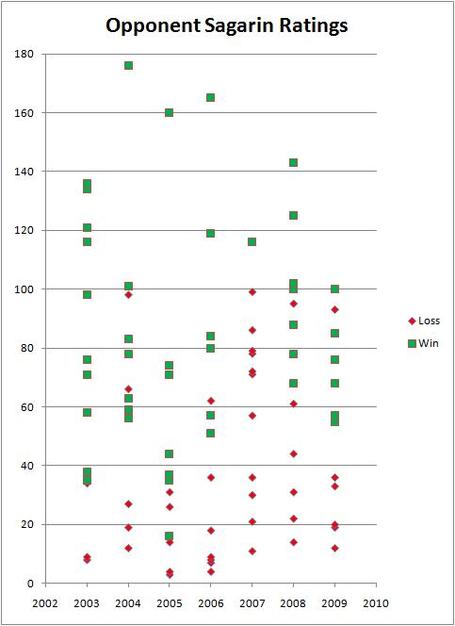 The most interesting trend that the above graph shows is that over the last seven seasons the Gophers have only defeated one team that finished the season in Sagarin's top 20, which was Michigan in 2005.  Even more interesting is that Glen Mason only defeated top 40 teams five times in his last four seasons, while Tim Brewster has yet to defeat a team that finished in Sagarin's top 40.  Besides the anomaly of 2007, Minnesota usually only has a good season when there are several weak teams in the schedule.

If the future is anything like the past, 2010 will probably indicate whether Tim Brewster will ever take the team to the next level and overcome a decade of mediocrity.  2010 could use at least one signature win over a top 20 team.