It would be easy to assume that Glen Mason's Gopher squads were characterized by strong running attacks with a weak defense, and that Tim Brewster's Gopher squads have been characterized by a strong passing attack along with overall offensive and defensive inconsistency.  While Glen Mason's non-conference cupcake schedule probably skews the numbers, the averages are nonetheless worthy of review.  As for the offense over the last seven seasons: 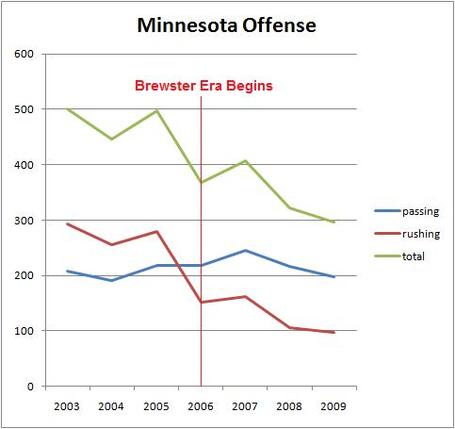 While his teams have yet to match the yardage of Mason's rushing attacks, Brewster's 2007 squad produced more total yards on offense than Mason's 2006 squad.  Mason's tenth and final offense was his worst in the previous seven years.  Since that 2007 season, the Gopher offense has continued to decline in total yardage each year.  Some blame revolving offensive coordinators, some blame a talent drain due to Mason's lackluster recruiting, and some blame the personnel.  Regardless of the cause, the offense is headed the wrong way.

On the other hand, Tim Brewster's defenses have improved each season since a catachlismic 2007.  The 2007 defensive coordinator was Everitt Withers, who now coordinates a North Carolina defense that is one of the best in the country.  How can that be?  Well, sometimes coaching can't make up for a lack of talent.  Withers' post-2007 success is the best evidence that Glen Mason left the talent cupboard bare in Minnesota.  The 2006 squad had already begun to decline, and that was before three of their best players on defense were kicked off the team for 2007: 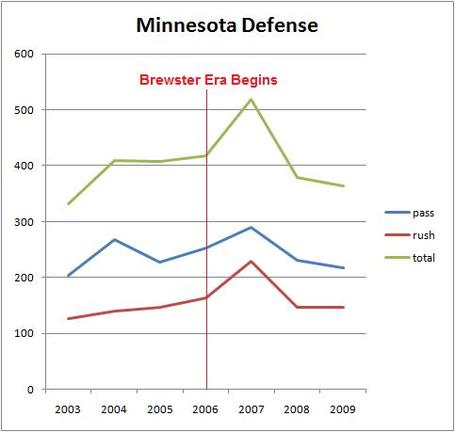