Golden Gopher Basketball - The eve of the Big Ten season

Share All sharing options for: Golden Gopher Basketball - The eve of the Big Ten season

The Gophers are finished with the non-conference portion of their schedule and are heading into the portion that really matters. Since the losses to Portland St, Texas A&M and Miami I think a bit of apathy has set in for Gopher basketball fans (myself included). This season was hyped to be something special. Not Final Four special, but arguably the best Gopher team we have seen since Clem's final season. But the buzz kill of Mbakwe/White situations, the disappointment of the 76 Classic and the frustrating loss in the Big Ten/ACC Challenge to Miami have lowered expectations and rendered the last five games a bore.

But it is time to re-ignite the passion, Gopher fans. We are on the eve of the Big Ten season and this is what counts. To get us ready for the road ahead I think we should look back at what we learned in the non-conference season and take a look at a statistical snapshot of the team.

After 12 games (18 to go) here is a look at how the Gopher stack up statistically in the Big Ten. As is my custom I'll start with the tempo free stats. 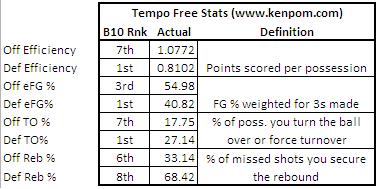 The numbers generally will reinforce what we already know. The Gophers are very good on the defensive end, OK offensively and suspect on the boards. What you may not have known is just how good we have been defensively.

Def Efficiency - we are allowing teams to score just .81 points per possession. As you can see this is the best in the Big Ten and what you cannot see is that this number is good enough for second nationally.

Def TO % - we create a turnover on 27% of our opponents possessions, that is a really good number. 1st in the Big Ten and 5th nationally.

I realize that our schedule hasn't exactly been daunting. But keep in mind that there are four Big Ten teams with a weaker schedule (according to Ken Pom's strength of schedule index) and other major teams like Kansas, Louisville, Notre Dame and Memphis have also played weaker schedules. Clearly the numbers above will equalize a little bit as we face Big Ten teams on a regular basis but those defensive numbers are impressive regardless of our weak schedule.

Offensively it is another story entirely. This is a great example of why tempo-free stats are so valuable. Straight up the Gophers are third in the Big Ten in points per game, averaging 80.8 in their 12 non-conference games. As noted, most of our schedule has been incredibly weak and we racked up impressive point totals against the likes of Utah Valley State, Brown, SDSU, etc. But our offensive efficiency is a much better indicator of how well we have played offensively. Tempo-free stats indicate that we are 7th in conference (77th nationally) scoring just barely over 1 point per possession. Being above 1.0 is good but this is clearly an average team offensively, especially if you assume that number will go down as we face better defenses that will be better equipped to expose our weaknesses. 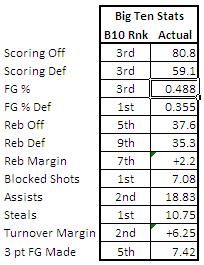 If you are interested in the raw numbers and Big Ten rank here is how things look...

What Have We Learned?

Mostly we learned that this team is way too similar to the 2008-09 team, just a year more experienced. None of the returning players have effectively demonstrated that they are significantly improved from last year. And neither of the two newcomers who have contributed have given this team anything significant that they were missing. The same short-comings from a year ago reared their ugly head against some of the better competition we have faced. In our three losses we struggled to generate any half-court offense, defensive rebounding was a problem area and outside shooting was inconsistent at best.

The hot story is the re-emergence of Blake Hoffarber over the last 5 games. Through the first seven games Hoffarber averaged 22 min per game, 5.4 points, 2.3 rebounds and 1.4 assists. Since then he has averaged the same amount of minutes but is now scoring 18.6points, grabbing 5.2 rebounds and contributing 3 assists per game. Those are truly impressive improvements. The real key has been his getting back on track from behind the arc. Over the last five games The Hoff has been hitting over 61% of his attempts and making nearly 4.5 per game. After watching him limp to 34% three-point shooting a year ago it is refreshing to see him hitting nearly 50% of his attempts this year.

BUT...we haven't had to play anybody in the last five games and we are heading into the Big Ten season. The run of dominating Brown, Morgan St, St. Joe's, NIU and SDSU has been nice to accumulate some wins, but Penn State is a completely different animal. Michigan St, Purdue and the rest of the Big Ten will present challenges we haven't seen in weeks. What were a problems before haven't necessarily been addressed. The problems of not being able to execute half-court offense and inability to effectively rebound are going to persist and will be what ails this team. Scoring a lot of points over bad competition and barely outrebounding the same smaller clubs is a mask for the real problems.

This shows that we were able to put on some full-court pressure, generate a lot of turnovers and score points. But if you watched the games you didn't see much of a half-court game or an emphasis on ending a possession with a rebound. These two things REALLY concern me as we head into the Big Ten. We can defend pretty well by forcing turnovers and blocking shots, but I'm concerned about our half-court game on both ends of the floor.

And it is these two areas that will define our Big Ten season. Three games of our non-conference schedule pointed them out and the rest did very little to address them. The emergence of Hoffarber is the lone bright spot in an otherwise ho-hum non-conference schedule. If he is able to remain hot and force defenses to devote significant attention to him, then maybe our offense will be OK. Having a dangerous outside threat will help, it won't eleviate our problems but it will help.

Lets say that Hoffarber continues to make 3-4 threes per game, Sampson becomes an offensive threat in the post and Mbakwe comes back to give us a rebounding machine. Then I sincerely believe this team can finish in the neighborhood of 13-5 (give or take a game) in the Big Ten. A win or two where they shouldn't and probably a loss or two to some of the middle-of-the-pack conference teams. That is how the Big Ten goes. That should be good enough for a 3rd place finish and a high seed in the NCAA Tournament.

I don't expect all of that to just fall into place so I think 13-5 is the upper limit of what this team can do in the Big Ten. I think realistic is 11-7. I count eight wins we should get, five very likely losses and then five games that could go either way (home to Wisconsin and then all road games OSU, PSU, NU and Mich). Go 3-2 in that group and you have 11-7. 12-6 wouldn't surprise me but neither would 10-8.

As we head into the Big Ten schedule what do you think?