And we finally get to kick off the Big Ten season. The Gophers host Penn State and one of the conference's best scorers in Talor Battle. He is the player to stop and the player to watch. Battle is absolutely capable of carrying the Nittany Lions to a road win tonight, but if contained the Gophers should cruise to a win at the Barn. In his freshman year Battle managed to go 30 min at the Barn without scoring a point. Excluding that aberation Battle has averaged 19.67 ppg, 5 apg and only 2 turnovers in his career against the Gophers

Battle is the number one thing that scares me about the Nittany Lions. #2 is rebounding. They are a pretty good rebounding team and we are not. If Battle can get rolling for 22+ and they dominate the boards then this game could end up as a bad loss for the Gophers.

With that said, I just don't see it happening. PSU hasn't played particularly well on the season losing to Tulane, UNC-Wilmington and Temple. The Gophers have been playing very well as of late, although it the competition is very suspect, and really should win this game at home. It will be very interesting to see how well the offense can play against what isn't a great defense but it will be much better than what we have seen since Miami. 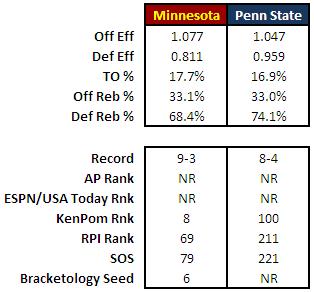 This is an expected win that would be a really bad loss for a team wanting to make the tournament with a higher seed than last year.