After their worst season in 58 years the Gopher baseball team looks to rebound in 2009.  The program with three national championships and 21 conference championships (do I sound like Tim Brewster yet?), hopes 2008 was an aberation and this year they will return to a conference title contending program.

Last year was kind of crazy for the Gophers.  In the non-conference portion of the schedule the Gophers defeated NCAA Regional finalists Tulane and Pepperdine as well as NCAA tournament participant Missouri. They were competitive with other NCAA Tourney participants losing to TCU in 12 innings and Cal.

But then the Big Ten season hit and the Gophers "cruised" to a 10-21 conference record.  Nearly half of those Big Ten losses were by two runs or less and that my friends was the Gophers' problem.  Losing leads late in the game became their trademark.

Much of that can be attributed to what was incredibly young pitching staff.  The bad news is the bulk of the staff that struggled is returning.  But the good news is much of our pitching staff is returning (you follow?).  The 2009 pitching staff is returning 70% of last year's innings pitched.  The likely #1 starter will be senior Tom Buske who returns after making 13 starts in 2008 compiling a 4-6 record with 50 strikeouts and a 4.92 ERA. Tyler Oakes is another senior pitcher who will likely have first crack at one of the starting pitcher spots.  But after Buske and Oakes nearly all of the remaining pitching staff are sophomores.  Your sophomore class included Scott Matyas-potential all conference closer, Phil Isaksson, Cullen Sexton, Luke Rasmussen, Scott Fern, Seth Rosin and Dustin Klabunde.  The last remaing pitcher who is likely to see quality innings is hard throwing, senior relief pitcher, Tyler Handran.  With all of those names your pitching staff will break down something like this... 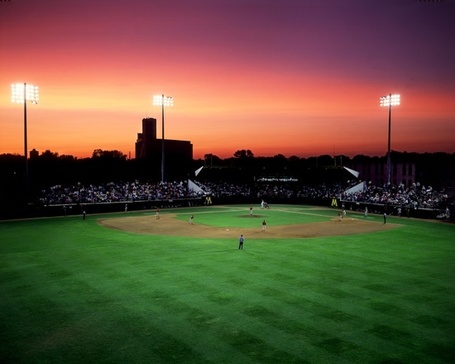 The Gopher lineup was not completely devoid of talent a year ago and returns a solid core mixed with some youngsters that the program is excited about.  You can take our your sharpe and write down LF, CF, C and either 2B or SS as line-up locks for the season.

Matt Nohelty will bat leadoff and play center field nearly every game this year (he started 55 of 55 games last year).  Nohelty lead the team last year in AVG, Hits, Runs and SBs.  Our next best returning hitter is Eric Decker.  Decker started a bit slow last year but finished 4th in batting, 2nd in SBs, 2nd in OB%, 3rd in runs scored and 3rd in slugging.  I did see Decker play and he really looked like a natural out there and could be poised for a big year on the diamond.  Behind the plate we will see Kyle Knudson who started 35 games last year and did not put up great hitting numbers but will be relied upon to improve at the plate this year.  One of the middle IF spots will be locked down by Derek McCallum who can play either 2B or SS and is considered by Baseball America as one of the top 5 draft eligible players in the Big Ten.

Mike Kvasnicka and Joe Hummel will also be regulars on the field but you will likely see them move around from game to game between OF, DH and even C for Kvasnicak.  Kvasnicka is a true sophomore who showed flashes of power last year and I would assume you'll see him in the middle of the lineup this season.

So that leaves 3B, SS and 1B open and they will likely be filled by kids.  If I were to guess I think you will see redshirt freshman at all three spots.   AJ Peterson at SS, Nick O'Shea at 1B and Kyle Geason at 3B.  True freshman Ethan Leiderman should see some playing time in the OF and sophomore Drew Hanish should see time in the IF.

So what does this all mean?  I think the team knows what it will get from position players Nohelty, Decker and McCallum.  I think they have confidence in Buske in the rotation and Matyas in the bullpen.  After that this team will have to rely on several sophomores to show some improvement (especially in the rotation) and some freshmen to show they are ready for Big Ten baseball in the infield.

This team was not as bad as they finished a year ago and when the law of averages swings back in their favor I think many will be surprised to see this team back near the top of the Big Ten.  Finishing in the top tier of the conference is highly unlikely but finishing near the top of the second tier is within their reach.  This feels like the year that is setting up next year.  With so many sophs and freshmen getting significant playing time this year the 2009 Gophers may continue to experience growing pains but these things usually pay off.