And we get another road game against a team fighting for their NCAA tournament lives.  It is odd that we are two-thirds done with February and this is the first time we will have seen the Wolverines of Michigan.

The most intriguing thing about tonight's match up is the potential starting lineup changes mentioned by Myron Medcalf yesterday in the STrib.  Maybe we see Joseph starting at SG and Carter starting at PF giving our offense a bit more juice to start the game.  With Westbrook and Iverson coming off the bench, which I think is a great role for Westbrook.  That should be interesting to keep an eye on.

To provide a little color on the Wolverines I queried Dave from Maize n Brew to give us some Michigan Man insight.  (ed note:  I also responded to some of Dave's questions which you can read HERE.) 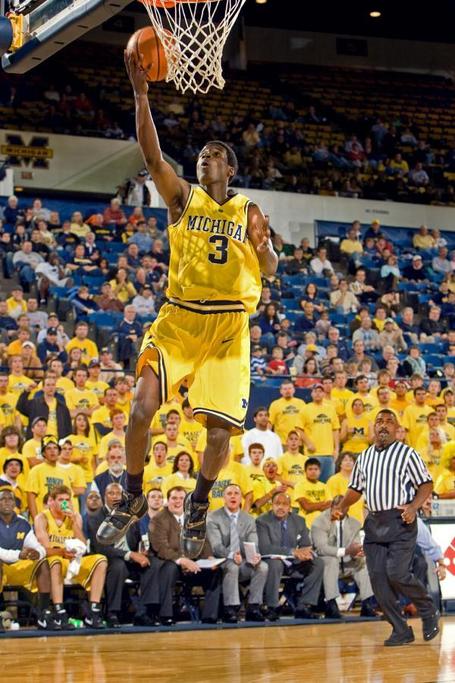 GN - Manny Harris (pictured right) averaged 1.5 ast and 5 turnovers in his two games against Minnesota last year. Is there any concern that the perimeter defense of the Gophers will cause young Harris to give us just enough extra possessions that the Wolverines drop this one at home?

MnB - I'm not sure Manny is the reason you guys will get any additional possessions. Worst case, Harris will cough the ball up 4 times. But his turnovers won't decide the game (please, God, don't let this come back to haunt me). What will decide the game is whether his hot hand from the end of the Northwestern game carries over. Harris is a streaky shooter. If he gets hot, Michigan's really in business. But if you bump him, put a hand in his pocket, harass him around the court, Harris gets frustrated and starts taking bad shots to avoid some of the contact. If you see him launching contested fade away threes, Minnesota's chances of winning increase ten fold. But if Harris is aggressive, fights through the hand checks, and finds some seems, Minnesota's in trouble.

GN - Everyone knows what Harris and Sims bring the court for the Wolverines. Give me another name or two who are capable of carrying the load should Harris or Sims struggle putting the ball in the hoop.

Oh wait. You're serious? Hell if I know. Michigan's had a couple of players go for twenty at random times, but no one's consistently shot the lights out other than Sims and Harris. Based on past performance, Zack Novak, Stu Douglas and Laval Lucas Perry can all get hot and pour in between 10-15 a piece. Novak and Douglas are snipers, but they've both seemed to lose their stroke as the season has worn on. LLP should be better than he's been, but with the exception of the Northwestern game, he hasn't played a lot and hasn't chipped in more than two buckets since January 7th.

If I had to put money on it, I'd go with Novak finding the range and chipping in the extra points to support Harris and Sims.

MnB - My guess is the team that played UConn tight and beat Northwestern is the one that shows up. The only way I'll know for sure which one shows up is if Michigan is actually moving around. It's that simple. When Michigan's dropped games or allowed teams back into games, it's been when they've stopped moving they're vulnerable. If you see people moving under or around the basket, we've got the good team on the court. If four guys are standing around the outside of the arc, throwing the ball around with no one moving, the bad Michigan is on the court. Another way to see if the bad Michigan is on the floor is if Michigan starts chucking threes with 20 seconds left on the shot clock.

GN - If you were coaching against Michigan what would you do to beat them? Where are their weaknesses? Would you pound the ball into the paint? Press? Play zone? More specifically if you were Tubby Smith what should the Gophers do to beat the Wolverines?

MnB - Pressure. Pressure. Pressure. Let Michigan shoot from the outside. Despite leading the league in attempts they're dead last at making them (31%)! The mistake is allowing Michigan to drive to the paint or take medium range shots. If Michigan doesn't have to take nine million threes because the lanes are open, then they're at a significant advantage. Defensively, another point exposed in the last two games is get after Stu Douglas and CJ Lee early in the possession. While neither is a total liability at the point, they're not exactly Iverson-esque with the ball and become turnover prone when pressured. Offensively, go right down low at Sims and Gibson. Michigan has no size on the bench other than those two players and if Sims gets in foul trouble Michigan's options shrink dramatically.

GN - What is it like being a basketball fan at school that is clearly a football school?

MnB - It is what it is. Basketball is actually my third favorite sport behind football and hockey, but it's more sport 1C than sport No. 3. You really have to understand what an unmitigated disaster Michigan Basketball was for so long. What a grade A embarrassment it was to the school when the whole Webber/Traylor scandal hit. Just how badly run and just what an after thought the team was.

It was really tough. Now it's still really tough, but for different reasons. Instead of shaking your head at incompetency, you're shaking your head at a rebuilding project. The future can never come quickly enough. Just this time basketball fans are wishing for the successful conclusion of a season, rather than wishing it would just mercifully end.

The fact that I can be excited about basketball again is exciting in and of itself.

Excellent stuff as we occasionally get from Maize n Brew (who is EASILY the best SBN Michigan blog out there).

It looks to me like the key to the Gophers winning tonight is embedded in question #3.  Their weakness is three point shooting (making them at least) and their strength is scoring on penetration.  Defending both is a relative strength of ours.  Al Nolen is very good at preventing penetration and we block a LOT of shots when opponents do venture into the lane.  This little nugget and the fact that Michigan is not very good at rebounding gives me great hope for tonight.

Official Keys to a Gopher win...

1 - Make MIchigan shoot from the outside.  Last in the Big Ten in FG%, 3-pt FG% and 10th in eFG%.  They are at home so you can expect that they will shoot a little higher percentage but we have to shut down the lane and block anything that comes our way.

2 - Offensive Rebounds!  Michigan is just as bad as we are at defensive rebounding but we are second in the conference in offensive rebounding getting back 36.4% of our misses.  If we can get an extra dozen or so possessions that will make a huge difference for us.

3 - Do NOT turn the ball over!  This has been really ugly for us lately.  I'm assuming we hit the offensive boards but we can't negate those extra possessions by giving it back to Michigan with turnovers.

As is the usual after I do a little research I start to get optimistic about our chances.  I do think this is a winable game and kind of like Wisconsin our best defensive players will match up well with their best offensive weapons.  If Nolen and Johnson can slow Harris and Sims a little bit I really like our chances, but if Nolen continues to struggle and we continue to stink on offense this will fourth loss in five games.