Another surprise recruit for Brewster?

Share All sharing options for: Another surprise recruit for Brewster? 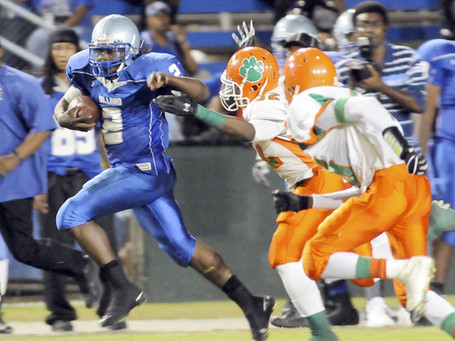 According to the Orlando Sun Sentinel, RB-Trabis Ward is planning to sign with the Gophers pending his SAT score.

"I am probably going to sign with Minnesota next week," Ward said. "I've been talking with [assistant coach George] McDonald every day and they are going to give me a good chance to play. He's high on me and they are waiting on me."

This would be another surprise four-star signing for Brewster and staff.  This would be a major surprise as nobody has Minnesota on his radar at all.  Neither ESPN or Rivals have Minnesota anywhere near his name.

Ward initially committed to South Carolina but has decommitted after their running backs coach left for Oklahomas State.  Rivals gives him four stars and ranks him as the 58th best player out ofthe state of Florida.  ESPN Insider gives him a 79 rating and has a bio that sounds like it was written by his mother.

Ward is an explosive back and a threat to break off a long run every time he touches the ball.  Major sleeper this spring but should see his stock rise as more coaches view his film.

On a couple levels this would be great for Gopher recruiting.  Clearly adding another four-star recruit adds another solid player to the list.  But bigger yet is Ward would be our fifth player out of south Florida.

This will be an interesting story to watch, but Brewster has potentially added two 4-star running backs in this class to add some depth, speed and talent to his backfield.

below is an interview...