5 things to watch in spring practice

Share All sharing options for: 5 things to watch in spring practice 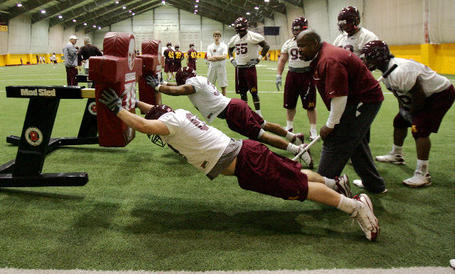 The quest to put the Insight Bowl, the Metrodome, an 0-4 finish and 55-0 in the past begun in earnest on Tuesday.  Some will tell you there is tremendous excitement surrounding this team, others will tell you there is reason for cautious optimism and your "friends" who are closet Badgger fans will tell they already know the script (win a bunch, lose a bunch and then blow it in a December bowl game).

I'm going to hold off on a season preview, but I will say there are some reasons to be excited, especially during spring practice.

1.  MarQuies Gray!  I'm a huge fan of Adam Weber and he'll be the starter (for the next two years), BUT Gray is the future of the program.  He represents an upgrade in overall talent and if this program is going to take steps from mediocrity to good (or maybe really good) he's the type of dynamic player who could potentially take us there. With Weber recovering from knee surgery Gray will be taking the bulk of the snaps.  Which he'll need because Brewster has said that Gray is currently #2 on the depth chart.

Getting Gray ready will be vitally important and something worth watching this spring.

2.  Three (?) new coordinators.  Kevin Cosgrove, Ronnie Lee and Jed Fisch are this year's new coordinators.  First and foremost, let's hope these guys will be here a year from now and we will have no reason to talk about them.  Obviously we want them to be successful much like the affect Roof had on the 2008 defense.  We won't really learn anything new this spring, but learning the new system will be huge and thank god there is spring practice to take care of some of the learning before August.

3.  The new offense ! (?)  The Spread didn't last very long and new offensive coordinator, Jed Fisch, is bringing in the new Pro Style / Power running / Attack offense (I like "The Attack Offense" as the TDG official title but that hasn't been put to a vote).  Spring practice is often overlooked in Gopher Nation but this will be a vital time for everyone to learn the nuances of the new offense.  Weber will be there but limited in his participation and Decker will be completely absent as he'll be with the 25th ranked baseball team.   So our two best players will be getting little to no reps with the new offense but that does present opportunities for others to step into their roles and learn to step up.

"The players have done a great job at studying up on the game plan. Adam (Weber), is going to be on the field going through every rep, and snap, but just not getting any contact. He is not going to be limited, except for getting hit. Duane Bennett will be in on every snap, but I am not sure if I am going to let him get hit. The learning process is going to fine, and we installed this offense fifteen practices prior to our bowl game. So, we are a little further along with this than some people might think. There is a lot of carry over from our old system with much of the same verbage. I haven't asked our team to wholesale learn a whole new offense.

I was at a McHale press conference the other day and he was talking about how valuable it is for secondary role players to get the chance to step into a primary role, even if just for a little while.  Gray will get to step into Weber's role and a host of recievers will get the chance to step into Decker's role.  This offense was toothless when Decker was injured last year so a chance for Green, Brandon, Carpenter, Kuznia, etc to get in rhythm without Decker should be valuable.

4.  Transfers.  Kim Royston, Matt Carufel, Hayo Carpenter and Jeff Willis all have a great shot at actually making a significant contribution early.  All four could easily be opening game starters.  I don't want to speculate on starters but seeing what kind of reps they get and how they progress will be interesting to watch and hopefully read about.  All have been mentioned in Brewster quotes as in battles for starting spots.

5.  Offensive line.  This unit was bad last year.  We add Carufel and Jeff Willis; and Matt Stommes moves from defense to offensive line.  The hope is that the OL, which is returning a number of it's young players from last year, will have a new look a new attitude and better results.

"I am really excited about the competition that we have up front when you look at Trey Davis, Ryan Wynn, D.J Burris who is competing for the center job. We have outstanding players competing for a singular job right now. Matt Carufel is stepping in at the right guard spot who transferred from Notre Dame. We really think that he is going to bring us something special. I am excited about the switch of Dominic Alford from left tackle to left guard. I think that Dom is going to give us a physical inside presence at the guard position. He can pull and he can run and do the things that we want to get down athletically. His size is something that we are really looking for and we are really excited about his development inside.

A guy that has come out of nowhere that I really think is a very pleasant surprise for us as we going into spring practice is Matt Stommes. Matt goes into spring as our starter at left tackle. He is 6-7 and is now weighs 304 or 305 pounds. He strength gains have been outstanding and he is an excellent athlete. He didn't start for us at all last year. We started him at the bowl game after fifteen practices with Tim Davis and I really thought that the strides that he made we excellent. He is an extremely smart young guy and he is our best athlete on our offensive line. He is potentially and the pro scouts that have come in and looked at his prototype. He is almost 6-8 and 305 pounds and arm length at 36 inches. He just has some great measurables.

Jeff Wills is another guy that we have talked about he's going to get into the battle for right tackle. He is a very large young man, and has worked extremely hard at getting himself in better physical condition. We think that he is going to, along with the other guys, add to the physicality that our offensive line is going to need to really help us."

This will be hard to gauge until we hit camp in August, but the time spent this spring will be great for them to learn the offense and come to camp in August with confidence and attitude.

2009 will be an exciting year.  Better non-conference schedule, the new stadium and a ton of returning starters should make it a fun year.