Share All sharing options for: Gopher Baseball heads to Illinois trying to hold on to first place

Your first place Gopher baseball team is looking to stay at the top of the Big Ten through the first half of the Big Ten schedule.  In what has been a remarkable turnaround the Gophers have climbed to a #23 national ranking, have a 4-2 record against other ranked teams and after this weekend will have already faced the other three Big Ten teams who round out the top four.

If you were not aware, the 2008 baseball season was the worst in decades for this usually successful baseball program (think Michigan football 2008).  Many of the pre-season prognostications assumed the Gophers would be better and would finish top half of the Big Ten.  But a year removed from the disastrous 2008 spring they Gophers are ranked and in the driver's seat to win their 22nd Big Ten title, first since 2004  (NOTE: there are still 15 Big Ten games remaining so they have a ways to go yet).

But all of the dreams of Big Ten titles and NCAA Tournament births and trips to Omaha all hinge on winning actual games.  So the Gophers head on the road to take on Illinois who currently sits at third in the Big Ten standings (6-3).  This will be the biggest weekend series of the year until a trip to Ann Arbor looms in early May.

Both of these teams seem to be winning with a different style than the rest of the Big Ten.  Ohio State, Indiana and Michigan are three other conference teams that we should fear and they win with scoring runs.  All three are the only teams with 30 or more team home runs and OSU/Ind are top two in batting average.  The Gophers and Illini can score runs as well but mostly they are getting it done with pitching and defense.  In both categories the Gophers lead the Big Ten while Illinois is second. 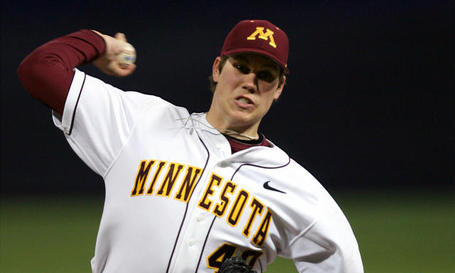