Derek McCallum, hats off to thee

Share All sharing options for: Derek McCallum, hats off to thee

This may be several days too late but I think Gopher SS 2B, Derek McCallum deserves some recognition from TDG.  McCallum was the Big Ten Player of the week, was also named the Collegiate Baseball Magazine National Player of the Week and is certainly on a short list of players who could be Big Ten Player of the Year.  His stats for five games last week were as follows (this link should work for game-by-game stats)... 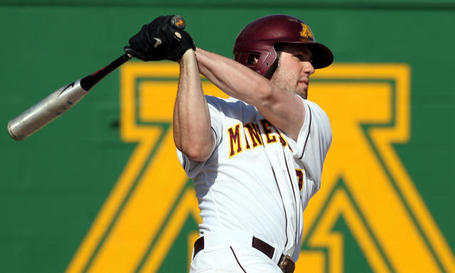 That is a pretty impressive week, the only thing that would have made it better would have been a series win over Illinois rather than losing two of three.

McCallum had been hot for much longer than just the previous week as he carried a 20 game hit streak into yesterday's NDSU game.  Unfortunately he went 0-3 with a walk and a run scored to end his hit streak.  The streak is over but take a look at McCallum's season stats to date...

You can watch McCallum this weekend as the Gophers host Purdue at the Dome and Friday's game will be televised on the Big Ten Network.  The Gophers are trailing Ohio State by 1.5 games in the Big Ten standings and will look to get back to the top with a sweep of Purdue!