Gopher baseball stays in the hunt with sweep of Purdue

Share All sharing options for: Gopher baseball stays in the hunt with sweep of Purdue

This was a full weekend for sports fans.  The NBA playoffs, NFL Draft, MarQues Gray put on a show at the Gopher Spring Game but I'm not going to let you forget about Gopher baseball.

The Gopher baseball team swept Purdue to inch back to within a 1/2 game of first place in the Big Ten.  Ohio State dropped game three to Northwestern so the Gophers (and a few other teams) snuck back to even in the loss column with the Buckeyes looking something like this at the top... 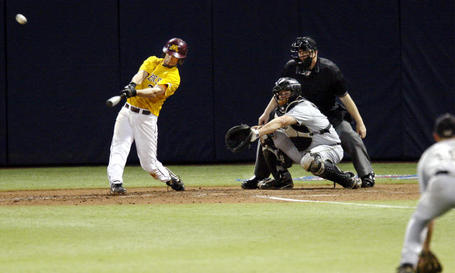 Looking at the standings we are finished playing the teams at the top with us.  We took two of three from Ohio State, lost two of three to Illinois and split with Indiana.

Brief recaps of this weekend's games...

Derek McCallum continues to be the local story that virtually nobody is talking about.  The sophomore is leading the Big Ten in batting average, slugging %, RBIs and is one back in HRs.

This weekend is the last home weekend of the season.  Saturdays is "Burst the Bleachers" day and all tickets are just $1.  I can't think of a better way to enjoy a Minnesota spring afternoon.  Get out, check out this team and cheer them on to a sweep of the Hawkeyes.