Share All sharing options for: "When March Went Mad: The Game That Transformed Basketball" by Seth Davis - TDG book review 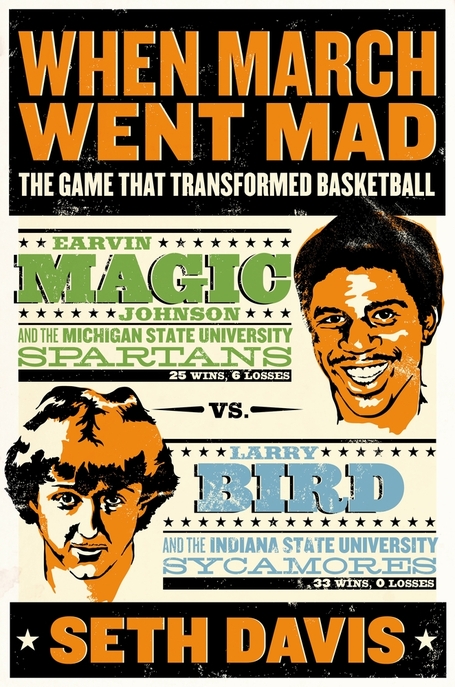 I am a march madness junkie.  The first weekend of the NCAA tournament are easily my four favorite days of the year.  For the last several years I have purchased the DirecTV package to have access to all the games, I bring in a second TV into my living room, hook up a TiVo box to both TVs and I do not leave my living room for four days.

So when I was given the opportunity to review Seth Davis' new book "When March Went Mad: The game that transformed basketball" I was thrilled to do so.  The book follows Michigan State and Indiana State during the 1978-79 season that ended in the epic NCAA Championship game featuring Magic Johnson and Larry Bird.  But the book is more than anecdotes surrounding the seasons of those teams.  Davis ties the star studded game to a brand new cable sports network in Bristol and the newly formed Big East conference.  The '79 game gave NCAA basketball a boost in an era when the NBA was really struggling.  But the addition of a power conference in some of big cities along the east coast and the humble beginnings of ESPN really propelled the NCAA tournament into what we know it as today.

There is probably enough material to write a book just on the personalities and what became a lifelong rivalry between Magic and Bird.  But this is more than a book on a particular championship game, it tries to help us understand how we got to this madness.

I was promised a brief interview with Seth Davis to get a few of his thoughts on the book, but I guess he was busy for the month of March and I'm no longer holding my breath.

My favorite aspect of the book is the contrast in personalities between the two key figures of the '79 Championship game.  Bird was a total recluse, wielded far more power than anyone at Indiana State and he knew it.  At that time the NBA was allowed to draft juniors who did not declare for the draft, these kids had until next year's draft to sign and that could happen at any time.  Since Bird was drafted by the Celtics after his junior year, If the Sycamore's season had tanked early, he didn't feel like playing anymore or he just grew tired of the college scene he could have left in mid-January to go play in Boston.  He knew this, his coaching staff knew this and he was able to demand whatever he wanted.  His primary request that he didn't want to talk to the media,  NOBODY.  Not local reporters, not national reporters, not student newspaper reports, probably not even talented bloggers.  They guy was arguably the best player in college basketball and he virtually talked to no one all season long.  Unimaginable in today's world.

On the other hand you couldn't keep Magic away from the spotlight.  Even while Michigan State struggled to live up to their hype he was the life of the party wherever he went.  After a solid freshman season he debated declaring himself eligible for the draft.  He obviously waited one more year to take a shot at a National Championship.

The stories are entertaining and it chronicles an epic NCAA seasons leading up to one of the greatest NCAA Championship games.  There are plenty of detailed descriptions of games throughout the season which can get a little old but for the most part this was a quick read and it is recommended.