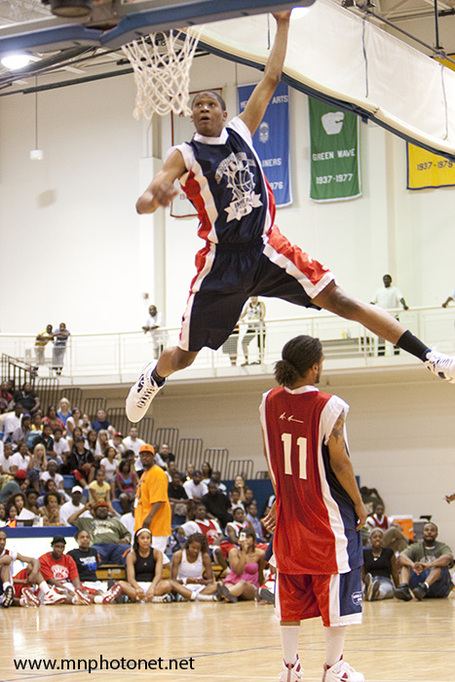 And the Howard Pully Pro-Am has begun.  Marcus Fuller is Mr. Gopher sporst newspaper guy and he doesn't take the summers off.  Marcus was at the first night of the summer league games and has this to report...

In a losing cause, Gophers junior guard Blake Hoffarber and incoming freshman Rodney Williams Jr. had 17 and 13 points, respectively. Williams had nearly double digits in blocks (seven) and five dunks, including one when he almost jumped over Nolen on a tip-dunk just before halftime. He also blocked former Gophers player J'son Stamper three times in the first half. Smith will love the way this kid can protect the basket when he's challenged straight up. Fans will also love his breathtaking hops, of course.

I am really excited about Williams.  I've always kind of considered him the third best of our incoming class but he may be the one I am most looking forward to watching.  Freakish talent and will be able to defend at the Big Ten level immediately.

The picture to the right is NOT from the Howard Pulley games, it is from the Inner City Classic and the pics are courtesy of Mike at MN Preps.com.