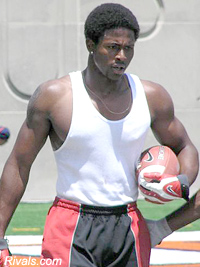 Calvin Phillips will eventually be a Golden Gopher, though you won't see him in uniform until at least fall of 2011.  Brewster and staff got an early jump on the 2011 recruiting class by landing their second player of the class (Mahtomedi OG, Tommy Olson was the first).  Phillips is an Illinois native who was very impressive at the Chicago Nike Combine back in March, which featured more than 800 potential prospects.

Running back Calvin Phillips (Momence, Ill./Momence) could potentially be the top prospect at the event. The 6-foot-2, 205-pounder ran a 4.69 second 40-yard dash, had a 4.54 second shuttle, a 35.3-inch vertical leap and posted a 33.5 in the kneeling power ball toss (used to measure an athlete's strength).

Calvin Phillips is getting attention from several Big Ten schools. Phillips rushed for 1,426 yards and 24 touchdowns as a sophomore and plans to camp at Illinois this summer as he gets ready for his junior year. "Basically, I am just trying to improve more and more and build on what I did last year," he said.

The article goes on to say that Illinois is the clear favorite to land Phillips.  The Illini were the only other ones to offer Phillips at this point but he was receiving interest from Michigan, Mich St, UCLA, Kansas and even LSU.

Phillips is already on the radars of scouting services and will likely be a highly ranked prospect when the 2011 rankings come out.  This Scout article tells us that he has a college ready body (as a sophomore in high school) and has been nicknamed the "Freak".

The obvious thing to point out here is that Phillips is an Illinois native who has given nothing other than his word that he will sign his name to be a Golden Gopher in about 19 months.  CLEARLY things could change in that span.  But there are some interesting relationships here that would indicate this very early commitment just may stick.  Gopher Illustrated's Matt O'Connell put together a very nice article on this commitment and what really brought about this early verbal.  It turns out that Phillips' cousin and close confidant is Curtis Crossley who is a college scout working for the Minnesota Vikings.  But having his mentor living in the Twin Cities is only part of the story...

Phillips mentor and cousin Curtis Crossley and Minnesota running backs coach Thomas Hammock were college teammates at Northern Illinois. While that did not play a role in Phillips decision, his relationship with Hammock did. "Coach Hammock is a great guy and he is a great coach. When I was up at Minnesota for camp he was just hyping me the whole time and telling me that he and I could do great things together. We got really close and every time we talked he would tell me about how he could make me a better running back and how he could use me if I come to Minnesota. I loved what he told me, but I always feel that he is honest with me. He tells me that he does not play favorites and that he will play his best running backs and I like that. I want to play if I am the best and I feel like he can get me there. I always have felt good about Coach Hammock and he is a big reason I am a Golden Gopher."

By most accounts this appears to be a pretty solid commitment at this point.  I see two scenarios where Phillips potentially changes his mind and ends up somewhere else.  The first would be that the current Gopher staff is no longer the current Gopher staff in 19 months.  If Coach Brewster and his staff are unsuccessful over the next couple seasons and Joel Maturi feels compelled to go a different direction then clearly Phillips has the right and will likely look at other schools.  The other scenario is if Phillips ends up being a five-star prospect who can truly go to any school he wants to go to.  If the USC's, Florida's, Notre Dame's and Texas's of the world start whispering in his ear, don't be surprised if Phillips has a change of heart.

One other tidbit worth noting (subscription required) is that Phillips has had some disciplinary issues in the recent past.

Phillips also has to work on some other problems. Disciplinary issues caused him to be dismissed from the boys' track and field team this spring. The sooner he's able to put those issues behind him, the better.

Obviously nobody none of us know the situation and I'm not going to comment on it, but it did happen and hopefully it is as simple as him being immature and this will serve as a brief wake-up call for Phillips.

Ultimately this is very early and kids change their minds all the time in the recruiting game.  But this is a significant verbal from a kid who appears to be very talented.  Brewster went into Illinois and took a kid that was offered from the homestate Illini.  I don't think the Zooker will give up on Phillips, but this is once again signaling that this staff isn't afraid to go and get kids from anywhere.  I realize this isn't Reggie Bush who committed to the Gophers incredibly early but in the past going after a kid like this would likely have been a waste of time.  Say what you want about Brewster and his ability to coach but he and his staff are some of the best recruiters in college football right now.