Share All sharing options for: Eric Decker at the Big Ten Media Days 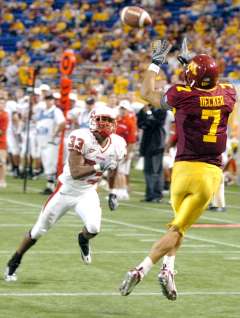 Nobody from TDG was able to attend the Big Ten Media circus in Chicago this week.  I was however able to secure a mole badger to ask Decker a few questions for me.  Below are a series of quotes along with my comments.  Bear in mind there are a lot of cliche's and some of the same party-line quotes we've seen from Brewster on down for months.  But I think there is  some valuable info in here.

I'll start with a quote on the man throwing the ball to Decker.

"The record doesn't show what kind of a leader he is and what kind of an athlete he is. The toughness he has and the ability he has as a quarterback-smart wise; watching film with him it is unbelievable what he can see and what he picks up. I think that translates on to the field and he knows where to put the ball in certain situations, now he has flexibility to change plays on the line so I think he should be special with those guys."

This really gets to Weber's intangibles that often get overlooked.  In the brief moments I've been around the team and seeing how Weber carries himself he really is someone respected on this team and even as a sophomore last year he truly was a leader on this offense.  So I knew he was looked up to but the comment about his film work was interesting.  Obviously he has put the time in, knows what he is doing and has been given the autonomy to make reads on the field, pre-snap.  We will see how much his 25 games of experience help him this year in making reads and being a half-step ahead of the defenses this year.

What about his fellow receivers?

"With what we are trying to do offensively, establishing the running game, I think we have the threats as a receiver corp to be successful. We were a younger team last year and these guys got experience now and they understand the mentality and what it takes to get the job done. We do have the playmakers available it's just now, just executing."

Standard line about establishing the running game and how that will impact the passing game.  While this is important and huge point of emphasis this offseason, the fact remains that our best weapons reside in the passing game.  Weber is a very good and experienced QB, Decker is potentially an All-American, Hayo Carpenter could add a dynamic dimension to the offense (or could be a bust), MarQueis Gray is multi-dimensional, Brandon Green has the makings to be very good and Troy Stoudermire is a potential game-breaker when the ball is in his hands.  So Decker is correct that now that this group has some experience they really need to execute and be the playmakers they are capable of being.  The follow up question (which I was not there to ask) is, if you get injured again are these guys capable of picking up where you left off and not allowing the offense to stagnate like it did in 2008?  Hard to replace a guy like Decker but hopefully they've improved enough to at least make some plays along the way.

I wanted to get some insight into David Pittman.  He came into the program last year with a fair amount of hype and whether it was due to injury or lack of production to earn reps in the game, he gave this offense next to nothing last year.

"I heard he had a great spring. He's kind of a leader on the team. He was an ex-QB so he understands the system, he's able to teach guys and really conceptualizes what we are trying to do offensively. On the field he runs consistent routes he's just a consistent guy on and off the field."

It is interesting to hear that he is viewed as a leader and that he understands what is going on with the offense.  Those quotes lead me to believe it was the injuries last year that slowed him more than anything else.  I'd love to see him take some strides and while we are all watching and waiting for Hayo to break out, maybe we'll see Pittman have a great year.

The new offense may be the single most intriguing thing about the Gophers this year.  And more than just the formations and plays, how creative will they be with their play-calling?  So was hoping to gain some insight into the offense from Decker.

"It will be better for what we're doing in the Big Ten, to win ball games you have run the football and we kind of lacked that a little bit last year. But that's something we stressed this past spring and offseason is really pounding the rock. I think overall a good friend of the passing game is a running game if we can run the ball the passing game will open up."

Pretty standard response and not exactly what I was hoping for, but not unexpected.  I guess he's not going to open up the playbook and start showing me the secrets of the Gopher offense.

I wonder too how Fisch's background as a receivers coach in the NFL would impact Decker and his learning curve.

"Oh yeah, I got to run routes with Larry Fitzgerald, Greg Jennings and some of those guys. It really does help, coach Fisch understands the game, he's been there, he was a receiver coach at the next level so he's able to demonstrate certain drills or things I need to focus on to be a great receiver."

The quote doesn't really teach us anything but obviously there is some respect for Fisch and what he brings to the table for a receiver looking to be drafted next spring.

Next Decker was asked about the Gophers taking the next step.

"We had a young team and inexperienced team last year and I think from this point on we've gotta learn how to show up every week. I think with the depth we have now, we have the pieces we just have to figure out the puzzle."

Pretty standard quote and accurate.  This team is more talented and the youth excuse has to go away eventually (we are the most experienced team in the country).

Decker also talked about baseball, getting drafted and what the future may hold for him.

"It's always tough, cause when you get an opportunity to do two things you love at the highest level you really don't want to give up on. But I think my focus is on football and I think Minnesota (Twins) understands that. They still have until Aug 15th to offer me a contract so we'll see what happens in the next couple weeks. I'm focused on football and I'd like to see a future with me in the football arena."

It is good to know that football is his first love, not just the Gophers but the NFL is his dream.  He may still sign with the Twins as a back-up plan but he'll be on the field some September.

Finally, the Axe!  I would love nothing more than for Decker to help us bring that trophy back to Minnesota.

"That's one game that I circle on my calendar because it's such a fun game. The rivalry between the two teams, obviously they call it border battle it's everybody in Minnesota versus everybody in Wisconsin, it's kind of a bragging rights deal. It's been a while since Minnesota has seen the Axe, opening up with them at home for the first Big Ten conference team I think will be an exciting time and hopefully we'll get that Axe back. Wisconsin is a great team so it will be a great challenge."

The quote didn't reveal anything or provide any bulletin board material but after that game in Madison last year I can guarantee you this is the game most of the Gopher roster has circled and want to win more than the rest.  Iowa was embarrassing but this game was a heart-breaker last year.  Decker will hopefully be in uniform and dominating the Badger secondary all afternoon!