Doral Willis and The Pahokee Ten

Share All sharing options for: Doral Willis and The Pahokee Ten

Instead of the scheduled Golden Nuggz, this morning's report is of another recruit who has committed to the 2010 Gopher class and the unfathomable talent of his high school team. Doral Willis, a defensive tackle from Pahokee Florida, has committed to play for Minnesota. Willis is listed at 6'0 332 pounds. Here's a video of Willis in action:

Willis attends Pahokee High School, which is home to several highly rated recruits for the 2010 class: 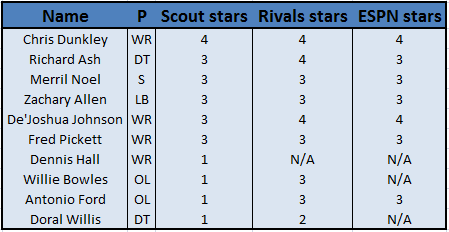 While some of these recruits have already given their verbal commitments, talented players such as defensive tackle Richard Ash are also considering Minnesota.

Doral Willis has impressive highlight video, and should be a strong addition to the 2010 class.

In 2009, the "Skyline 4" from Dallas Skyline High School including Keanon Cooper, Troy Stoudermire, Da'Jon McKnight, and Spencer Reeves should all contribute for the Gophers. How many commits will the Gophers land from Pahokee High School by signing day in 2010?: